Ardenne student eager to make her mark in green energy 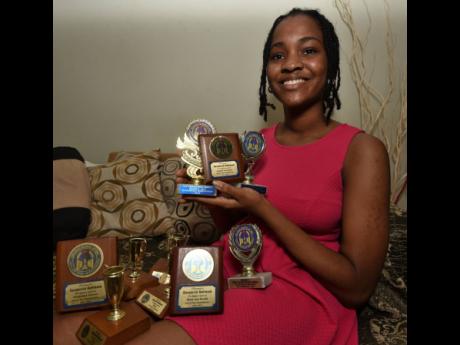 Ian Allen
Ardenne High School student Racquiesh Robinson poses with some of the many trophies she has won at the school over the years.

From a tender age, Racquiesh Robinson accepted the challenge to achieving excellence. As she ventures into her engineering career, the 18-year-old is eager to make her contribution to the development of green energy to meet Jamaica’s sustainable development goals.

“I believe we are not where we should be,” she told The Gleaner. “I see myself making sustainable development and advancement cheaper.”

The Ardenne student highlights the importance of the social aspect of sustainable development and expressed that an app “which functions as a reward system to give incentives for persons to engage in eco-friendly practices, like composting and recycling,” could be of great benefit to Jamaica.

“Imagine a society where you could go to the store and make purchases using credits you’ve accumulated by dropping bottles off at a recycling point,” she said.

Admitting to crying when she watched the movie Happy Feet as a child, Robinson expressed concerns for the ramifications of global warming in Jamaica. As such, she feels strongly about Jamaica reducing its dependence on non-renewable energy to secure its future and contribute to reducing carbon footprints globally.

It is this passion and quick commitment that helped her to be accepted to attend the United States’ honour residential programme at the National Youth Science Camp in Virginia that will be held virtually this year.

From scores of international delegates, Robinson is among three Jamaicans accepted based on excellent academic records, particularly in science, technology, engineering and mathematics, leaderships and co-curricular activities.

“When I came to Ardenne, I started interacting with persons who were doing technical drawing,” she said, explaining how she developed a love for drawing, which led her to choose engineering over her first love, medicine.

The ultimate deciding factor for Robinson was the impact she can make, and she believes she will be able to give back more to the development of Jamaica by being an engineer.

Though it is a male-dominated field, she lauded her male classmates and teacher, Mr Lawrence, for always providing support for her. However, being aware of the challenges other young women are facing, the overachiever has committed to joining international movements to work towards making the area more of a level playing field by providing information and developing games.

“I am actually one of the top students for most of my classes, so I don’t face any real discrimination in that regard,” she said.

Robinson was also selected as an international delegate to attend the United Nation’s 10th Economic and Social Council World Youth Forum in April of this year.

While she racks up awards for academia, starting as early as the kindergarten level, her involvement in areas such as the computer club and emerging global leaders Jamaica, both of which she is the president, have added trophies to the collection which she is unable to count.

She graduated fifth form at Ardenne with 10 grade ones, with distinctions in the Caribbean Secondary Education Certificate (CSEC) exam.

As she embarks on deep research to find a scholarship and a school to pursue her dreams, she advises others who have their desires to find a mentor who can provide strong support, advice and direction.

‘Hard-working’ and ‘self-made’, are two of the words that young Robinson used to describe her mother, Beverly Robinson, who acts as the main source of her inspiration.

“She always had an interest in science, so I would take them to the bookstore on Saturdays,” she said, explaining that both her daughters are avid readers.

“Racquiesh always wanted science books on issues like the climate from she was very small. She didn’t like reading novels,” she said.

Reminiscing on father-daughter moments between Racquiesh and her late dad, Beverly shared that from around the age of three, Racquiesh was always fascinated with his tools.

“He always told me afterwards that by the time she reached four or five, she would know what to give to him without him having to tell her what tool to pass,” she said with great pride.