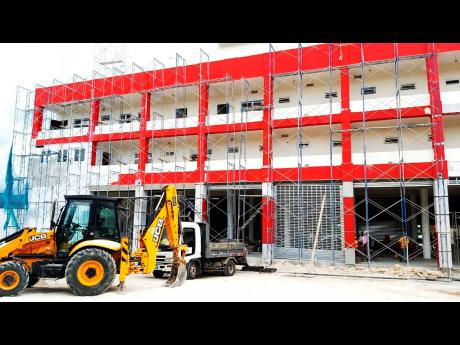 Contributed
Construction is ongoing at the Montego Bay Fire Station in St James. 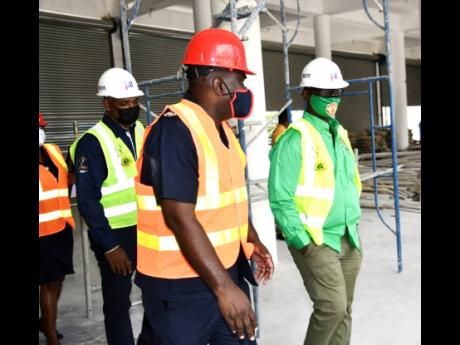 Local Government Minister Desmond McKenzie is confident that after several delays in the rebuilding of the Montego Bay Fire Station since 2008, the western city’s long-awaited dream of having its own firefighting facility restored will soon become a reality.

The J$534-million project is expected to be opened in a couple of months, McKenzie said last Friday, adding that it would be the “most modern facility in the Caribbean”.

“It is also important to note that despite the challenges of COVID-19 and some ‘stops and starts’ here, the contractors and those who are in charge have been able to keep the project within budget,” McKenzie said while touring the ongoing construction work at the fire station..

“So there is no overrun on the project, and we will complete this project in a timely manner, and the people of Montego Bay and the wider Jamaica will be proud of this investment.”

The new fire station is being built to replace the previous facility that was situated along Barnett Street in Montego Bay. That building, which served the parish of St James for more than 50 years, was demolished in 2006 after it was deemed to be structurally unsound.

Ground was originally broken for the fire station’s construction in 2008, and again more recently in 2019.

However, the project – which is being undertaken by the Jamaica Social Investment Fund’s Disaster Vulnerability Reduction Programme – was slowed by last year’s COVID-19 contingencies, like lockdowns and curfews.

“When you add the other two fire stations which are being built in Port Maria, St Mary, and in St Thomas, it is close to J$900 million that is being spent to build these three brand new facilities,” the minister said.

“If we are asking the men and women of the JFB to put their lives on the line, then at least what the Government can do is to provide the facilities for them to work in.”

Kevin Haughton, the JFB’s assistant commissioner in charge of operations, said that the brigade was looking forward to the new station’s official opening.

“We eagerly await the ribbon cutting and handover for this facility, which will certainly increase staff morale and the efficiency of the fire service,” said Haughton.

The station will house a state-of-the-art gym, office and dormitory facilities, and accommodate 250 firefighters.