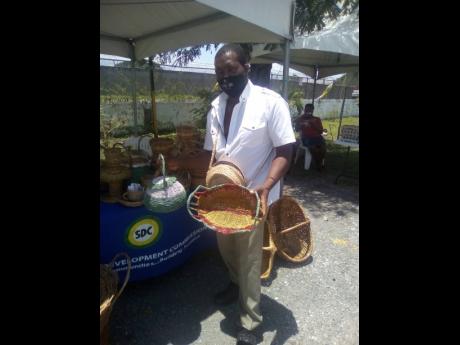 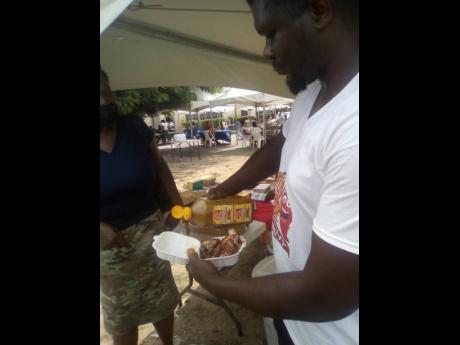 Contributed
Howard Mathews pouring some of his Flava Fire Scotchy pepper sauce on a bit of chicken at the fair.
1
2

Scores of residents in St Catherine were drawn to the inaugural farmers’ market and economic fair last Friday put on by the Social Development Commission (SDC).

The event was the first of its kind to be hosted on the grounds of the SDC.

One vendor, wicker craftsman Leroy Jones, said he appreciated the effort of the SDC, adding that his work with wicker started with a vision which has now come full circle with the help of the SDC.

“I started to do wickerwork in 1994 after I received a vision that I should chop the wicker vine from a large guango tree in my community of Planters Hall. I followed the dream, cut the vine, and wove a basket, but it wasn’t straight and I practised until I got it right,” Jones said.

He added that he was eventually able to make a business out of weaving and selling wicker products in parts of Jamaica, but soon stopped as it was unregulated.

“My change came in 2017 after I started to work as a security guard at a school in my community. There was a worker there from the SDC who enquired if anyone knew wickerwork. It started with me building 10 baskets and a hat, now I am registered with the SDC to display and sell my craft items. It’s all good,” Jones said.

Meanwhile, Howard Matthews’ home-made Flava Fire Scotchy pepper sauce was one of the ‘hot’ items at the fair.

“This pepper is not normal. It is made from the same ingredients my mother developed 20 years ago, and I am very glad to be here to showcase the end product,” Matthews said.

Meantime, Parish Manager for the Greater St Catherine Social Development Commission, Samuel Heron, said the entity would continue its intervention for the growth of the parish.

“We (SDC) are duty-bound to help those we serve economically, emotionally and socially, therefore we are having this fair to give farmers, culinary persons, small businesses and artisans a chance to display and sell their items,” Heron said, speaking on the grounds of the SDC’s Port Henderson Road facility near Spanish Town, St Catherine.

Declaring the day’s activities a resounding success, St Catherine Eastern Member of Parliament Denise Daley said the promotion of entrepreneurship was a fitting response to the COVID-19-induced downturn.

“I commend the SDC for facilitating this economic empowerment activity here today. I know that it has been a challenge for residents to survive, so I truly endorse this as a meaningful step to ease the plight of those we serve,” Daley said.

“In fact, I think that more activities of this nature will be needed to help persons survive the economic setbacks caused by the pandemic.”

The elected representative, who is also the opposition spokesperson on shadowing local government issues, said she would also support the expo and fair to be held on the grounds more often.