Homeless to get 750 meals from Indian HC 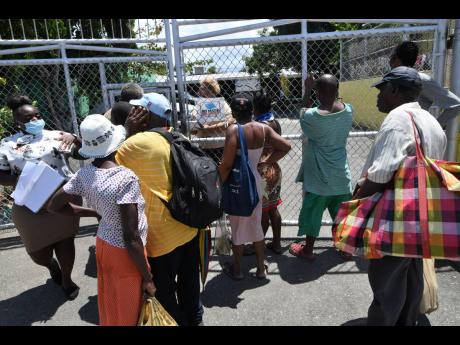 Rudolph Brown/Photographer
Needy persons gather outside the gate of The Good Samaritan Inn, Kingston during a hand-out of meals as part of India High Commissioner community outreach to celebrate India’s 75 years of Independence on Sunday.

Homeless persons in the Corporate Area will benefit from 750 meals that are being sponsored by Indian High Commissioner to Jamaica Rungsung Masakui and his team in the lead-up to the celebration of India’s 75 years of independence.

The meals will be distributed over a three-day period at the Good Samaritan Inn at Geffrard Place in Kingston.

On Sunday, the first batch of 252 persons was fed with lunches and the remaining meals will be distributed on Wednesday and possibly next Sunday.

High Commissioner Masakuni, who was part of a brief ceremony at the inn on Sunday, told The Gleaner that the feeding exercise was initially not a part of the planned activities to mark India’s independence celebration in Jamaica, but he was moved to include this community outreach activity after meeting persons from the inn three weeks ago.

Noting that it is not right to celebrate poverty, he pointed to the increasing gap between the rich and poor while emphasising that it should be the endeavour of every conscientious country to step in and fill the gaps where it can.

“We are fully aware of what hunger is like, we know what poverty is like,” he said, while crediting the Good Samaritan Inn for the work that it has been doing in offering a helping hand to the less fortunate.

The high commissioner further added that when India gained independence 52 per cent of its population was below the poverty line, but that has since been reduced to 18 per cent.

However, he said India still has a long way to go in eradicating poverty among its citizens and helping in the global poverty fight among its extended family in countries including Jamaica.

Chairman of the Good Samaritan Inn, Dr Eric Nathan, for his part welcomed the high commissioner and his team for joining with the charity organisation to give of their service.

“I am very happy for what is being done here today,” he added, while describing the high commissioner as a kind-hearted man who is not just a diplomat but an individual “who has a sincere heart of service and is willing to give of himself wherever he goes”.

The recipients who showed up for the meals were similarly grateful.

Winston Morgan, a 55-year-old mason who has been homeless for a year and has to seek refuge at the homes of different friends and family members said, “It’s a good thing dem doing, we feel happy about it and they can continue to help us. “

Another recipient, Elroy Wilkinson, who is not homeless but had shown up for the meal said, “It’s a good event, I feel good about it and I like the comments from the commissioner.”

The inn, which was established in 2007 by the East Jamaica Conference of Seventh-day Adventists and members of the Adventist Laypersons Services and Industries, provides clothing, meals, bathing and washing facilities for the homeless. The centre also provides maternal and dental care to the needy and homeless.