Apologise to the nation! 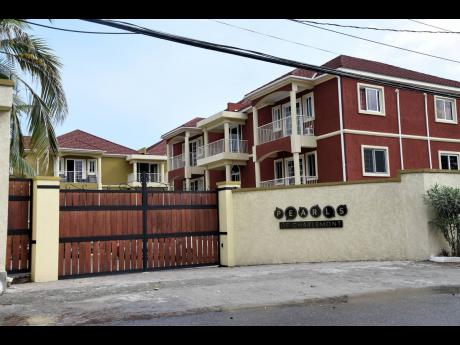 Ian Allen/Photographer
Pearls of Charlemont, an apartment complex along Charlemont Drive, Hope Pastures, St Andrew. There have been concerns regarding the mushrooming of multi-storey buildings on that road.

One of the country’s most respected architect is demanding an apology to the nation for the wanton development breaches that are taking place across the island without proper due process.

Dr Patricia Green, lecturer at the University of Technology, Jamaica (UTech) has criticised the authorities, insisting that somebody has to take responsibility, because the breaches were taking place in the approval process.

Anyone who wants to do any construction must submit an application to their local municipal corporation, which falls under the Ministry of Local Government and Community Development.

Dr Green pointed out the absence of things such as the basic infrastructure of sewer lines, which the 2017 development order presupposes that by the year 2025 would be in certain areas. That is why the neighbourhood densities have changed, Dr Green argued.

The authorities are giving out approvals, yet water and sewage are not in place. President of the Charlemont Drive Citizens’ Association, Antony Davis, concurred, saying this was the situation there, with every other lot being a muti-family dwelling. Letters to the National Environment and Planning Agency (NEPA), he says, gets no response. “We have asked for the investigating of breaches, we get no response. So, who is it that we are to appeal to?” he asked.

The Gleaner has learnt that at least one developer, having built a number of apartments without the proper requisite, was able to convince the utility companies to carry out services to a specific scheme without due consideration to the other developments on the road.

The residents in the area have been told that if they wish to connect to the system, they will have to invest in the pumps and other infrastructure.

“The response must come from the National Environment and Planning Agency,” insisted Green, as when a development is submitted to the municipal authority, the NEPA that has that density map, and can say whether they are in line.”

Qualifying that her concerns were not only about cement trucks or even whether or not the steel was put in the correct place in a building, Dr Green said, “I am speaking of the breach in the development process of Jamaica. We are speaking about a development, and an approval process that is taking place in absentia of correct procedures.”

Green also stated that building approvals at this stage in Jamaica’s history was arbitrary, owing to certain people being denied approval for whatever reasons,while others can get approvals in a month’s time.

She said it has been brought to her attention that there is disregard for existing guidelines, while citizens are being disenfranchised by the building and the approval process.

Enith Williams, past president of the Golden Triangle Neighbourhood Association, said they too have written to NEPA and the prime minister, “... asking them to speak to us as citizens and share the vision, and have us share our vision; and we have, to date, received no response. Only thing that happens is every morning or every few months you’ll wake up, and there’s a new high-rise going up, it’s unsustainable”.

Williams said contrary to popular belief, the Golden Triangle residents were not against development, noting that they are more concerned about the breaches.

Dr Green qualified the concerns, noting that developers were exceeding the habitable rooms in the 2017 density plan. In some cases, it is recommended that high-rises should be on a minimum half an acre lot; however, there are examples of them building on less land.

“Any country that comes and says it is civilised and respects its people, will respect the guidelines and work with the people,” she pointed out, explaining that there are neighbourhoods which are designated for a certain amount of habitable rooms, but approvals are granted secretly, and residents are only aware when zinc fences are put up next door to their properties and concrete is poured.

She says coming out of the issues in the country, UTech has introduced the Strategy for The Governance of Sustainable Built Environment, and is inviting citizens’ associations islandwide to express their concerns to the Faculty of the Built Environment.

Efforts to get deputy chairman of the Natural Resources Conservation Authority, Christopher Whyms-Stone, who was on the panel to comment on the issues, proved futile.

Whyms-Stone said he was not in a position to speak on behalf of NEPA.