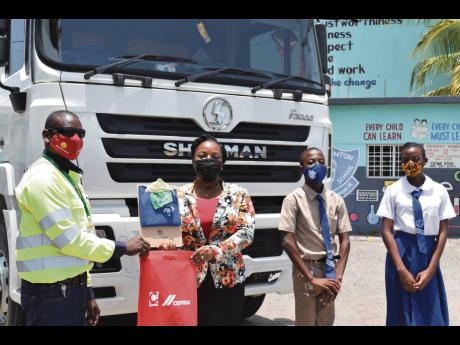 Contributed
Fleet driver at Caribbean Cement Company Limited Curtis Guthrie (left) makes a presentation to the principal of Watsonton Primary School, Marchelle Williams-Hinds,, during a recent visit to the institution to promote road safety among members of the student population. Looking on are students Ackiel Rowe and Malia Palmer.

Caribbean Cement Company Limited (CCCL) is aiming to reduce the number of road fatalities among children with the recent staging of its annual vulnerable road user (VRU) programme.

Statistics from the Road Safety Unit of the Ministry of Transport and Mining has indicated that since the start of the year, 12 children were killed in motor vehicle crashes.

Over 150 students from Hayes Primary and Junior High School and Watsonton Primary School in Clarendon participated virtually and in-person under the programme, which is designed to build awareness among the students in the safe use of the roads.

Among the topics covered by representatives from the company were the proper methods to employ when crossing a busy thoroughfare, and being aware of the blind spots on large trucks.

Supply Chain and Logistics Manager at CCCL, Jorge Herrera, explained that the VRU programme is a worldwide initiative of CCCL’s parent company, CEMEX, and children are targeted not only for being among the most vulnerable, but their impact on adults around them.

“We recognise two things; one, that there are a lot of children walking in the streets, going to school and home, or doing errands; and two, that they can be the agent triggering the change of behaviour in the adults. Through the children, we should be able to change the mindset of an adult not obeying the road rules and traffic signals,” he said.

Herrera added that it was important to start the change with the children so that they grow with a different mindset concerning the safe use of the road.

“We think that they are a very important part of our programme. We use the children as well to sensitise our truck drivers as part of our driving academy. Most of them have sons and daughters waiting on them, so making the drivers aware of the risks associated with driving the trucks and respecting and protecting the vulnerable road users are part of the same strategy,” he pointed out.

Meanwhile, principal of the Hayes Primary and Junior High, Hughroy Blake, said having students educated in road safety will help to minimise their risk on the road.

His sentiments were shared by principal of Watsonton Primary, Marchelle Williams-Hinds, who urged students to be more attentive while on the road.

Since the start of the VRU programme in 2018, which is conducted in June in observance of Road Safety Month, Caribbean Cement has visited more than 10 schools across the island informing some 3,000 students, from kindergarten to high school, about the importance of road safety.

The company has also donated breathalysers to the Ministry of Transport and Mining to allow the police to conduct random checks during routine stops.