Landslide victims say they have nowhere to go 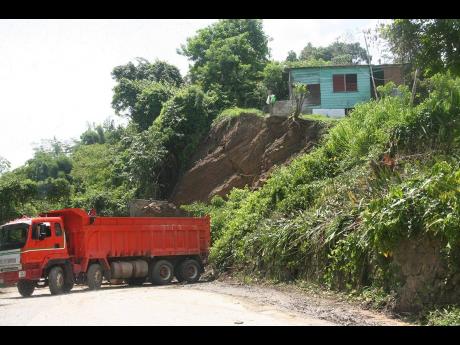 Photo by Bryan Miller
A crew contracted by the National Works Agency clearing a land slippage from the main road in Johnson Town, Hanover, on Wednesday. Residents in precariously perched homes say they have nowhere to go.

Residents of Johnson Town, Hanover, are on edge – literally.

The lives of seven occupants of two homes in the rural district remain under threat from land slippages on Monday and Tuesday that have them on tenterhooks.

Eileen Morris, who has vacated her house, is fearful for her future.

Hers is one of the homes at risk of destruction after the landslides blocked the community’s main road. The householders say they have nowhere to go.

In the aftermath of the first land slippage, the National Works Agency (NWA) issued a warning Monday to residents whose houses are precariously perched to immediately seek alternative accommodation.

A desperate Morris said she has no option and is appealing for assistance from state authorities.

“Dem only de tell me say me haffi move, dem nah tell me where to move go. Dem nah tell me if dem a go look place fi me, so di only place me haffi move go now is to tek mi bed and mi sinting dem and come put dem inna de cold road dung yah so,” Morris told The Gleaner on Wednesday.

Haliburton told The Gleaner that she and her five family members were not at home when Office of Disaster Preparedness and Emergency Management (ODPEM) and NWA personnel visited the community on Tuesday, but got word of the advisory to relocate.

Haliburton said that she is still sleeping in the compromised house.

“We would be very much grateful for any form of assistance because we just do not have it,” said Haliburton, who is worried about the immediate future of her family. She said she has not had a good night’s rest since Sunday.

Kenisha Stennett-Dunbar, disaster preparedness coordinator for Hanover, confirmed that her office and the NWA advised seven residents in the two affected houses to relocate because of the unstable soil.

Easton Edwards, councillor for the affected area, said he has referred Morris and Haliburton to Dunbar and Hanover Western Member of Parliament Tamika Davis.

In the first land slippage on Tuesday, the Johnson Town main road was rendered impassable for hours, resulting in several tourists travelling from Negril to Montego Bay to miss their flight out of the country.

The second landslide reduced traffic to one lane.