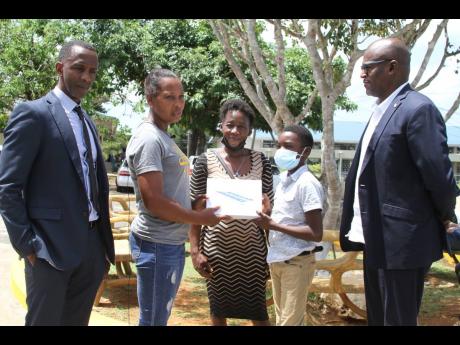 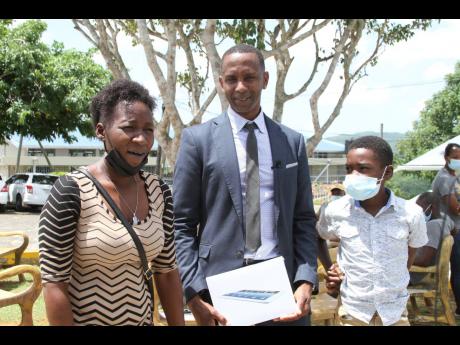 Last Thursday, Charmaine Warburton was overcome with emotion as she struggled to find words to thank Randy Griffiths, founder of the non-profit organisation Pencils4Kids.

“Thank you so much, thanks, I don’t have words to say thank you, but God will continue to bless you … thank you, I appreciate you,” she gushed at the man who made the trek from the States to make arrangements to cover her son’s school fee for the next four years.

Warburton, whose story was featured in The Gleaner Wednesday, February 21, shared the challenges she was experiencing with her 12-year-old son Avatar Muschette, a seventh-grade student at Clarendon College.

A certified practical nurse, she has had challenges finding employment and hence her son was struggling to access online classes, purchase books, among other things.

In despair, she poured out her heart in the story as she looked for assistance – her pleas connected with Griffiths who came to know about Warburton’s struggles from one of the organisation’s Jamaican volunteers, who asked him to help if he could.

Griffiths, through Pencils4Kids, in addition to committing to funding his school fees for four years, also took on the responsibility of ensuring the transportation fees and lunch money are secured for his weekly school outing.

Warburton, who has seen herself moving from despair to joy, can now rest easier as she basks in the unexpected blessing.

“Personally, I could have been an Avatar, it’s about someone in need, and wanting to make a difference,” he said, as he expressed the hope that Avatar will maintain an 85 per cent average.

Avatar was also presented with a 10-inch tablet computer.

Commenting on his good fortune, the youngster was at a loss for words: “I don’t know how to express how I feel, I feel pleasant,” was all the future pilot could manage to utter.”

Principal of Clarendon College, David Wilson, said he was happy about the assistance given to Avatar, and hoped that other students who are facing similar challenges would get help.

“Over the period we have had a number of challenges, the major ones being that our students don’t have the kind of resources to keep them up to speed with the academic programmes online. The issue of Internet, the issue of lack of devices, and of course even if there is Internet availability in the area, the cost to access it has been a challenge,” he said.

Wilson thanked Griffiths and his organisation for reaching out and providing Avatar with much-needed assistance.

“We have other cases in our school, but when one has been highlighted we want to say a pretty big thank you for that. We are sure that Avatar will benefit from this and will grow as a result,” he said.

Wilson also used the opportunity to thank the past students through the various chapters who have been helping by donating computers and laptops as well as preparing help packages for families.

He urged recipients to work hard and hoped that they, too, can some day in later years be able to give back.