‘We just hear something rumbling’

Family looks to rebuild after house collapsed during storm 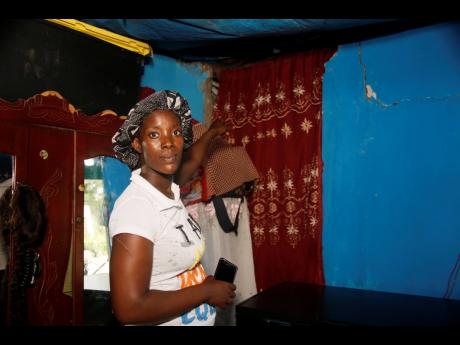 Nathaniel Stewart/Photographer
Bernarlee Francis of Race Course, Clarendon, points to the ceiling which collapsed during the passage of Tropical Storm Elsa on Sunday. 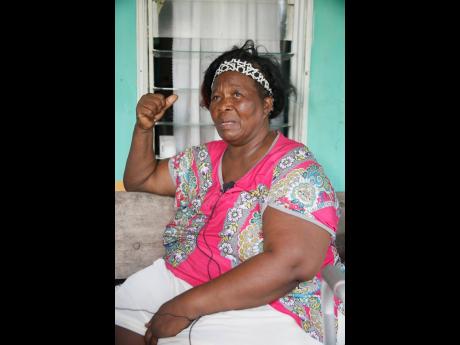 Nathaniel Stewart/Photographer
Jennifer Shortridge-Francis of Race Course, Clarendon, explains how her wall collapsed during the passage of Tropical Storm Elsa on Sunday.
1
2

Amateur video footage of flooded yards and murky roadways in sections of Vere in Clarendon bore the tale of the rains that pelted the parish on Sunday. In Race Course, residents said that the impact of the flooding associated with rains from...

Amateur video footage of flooded yards and murky roadways in sections of Vere in Clarendon bore the tale of the rains that pelted the parish on Sunday.

In Race Course, residents said that the impact of the flooding associated with rains from Tropical Storm Elsa was the worst they had seen. Jennifer Shortridge-Francis said she made plans for the storm by packing away her furniture and appliances, and covering them with tarpaulin. She was, however, not prepared for what transpired sometime after 12 a.m. on Monday when a section of her house collapsed, displacing the family of five.

“We just hear something rumbling, coming down, and when I look, it was inside that room ... the ceiling come down, and then after, [my daughter] came and call me and tell me that the wall is going down. I never came out until this morning, so when I came out, I saw that it was that bad ... me never know say it was that bad.”

Francis said a section of her three-bedroom concrete structure, which she has called home for 30 years, also collapsed in a previous storm. She told The Gleaner that the situation is compounded by the fact that her income started dwindling two years ago, after losing one of her legs in an accident, crippling her livelihood as a vendor. She said she would be grateful if she could get assistance with some building material.

Her daughter, Bernarlee Thomas, was in that section of the house with her 11-month old baby when the wall collapsed. She related that it was a scary experience. “The baby, me and the little boy (her two-year-old son) were laying on the bed and I was there when the rain start come hard. When the rain start falling, I heard the wall like it shifting, then I see two board fall out from the ceiling first, then the rain was there falling, then, after, I saw the wall coming down. It was scary and bad,” she said between sighs.

Next door, Sheryl Latty also suffered a similar fate, as a section of her house collapsed. Latty, who showed The Gleaner a makeshift chicken coop inside her house, bemoaned the fact that she had lost about 150 of her 200 chickens, and poultry feed, during Sunday’s flood. “The water just come down pan we so and wash out me hog, me chicken, and just a run through. The wall just start open up and the roof collapse,” she told The Gleaner. “A swim we a fe swim fe carry out some (of the chickens), ‘cause the whole a them wet. A float we go see them a float pan the water top.” She said her pigs were rescued by neighbours who swam through her yard, which was transformed into a pond.

Latty said she was in disbelief as she stood in her yard on Sunday in waist-high water. She believes that cleaning the gully that runs behind her house could have mitigated the flooding. “Me a fe say thank God we nuh drown. It could a worse than that. A nuh yesterday a the first we see so much water, but a the first it run through. The gully never clean. Wah time yah when the whole heap a rain the gully did clean, so much water never come through,” she said.

On Sunday, two roadways in Gimme-Me-Bit in the parish was damaged during the heavy rains; one of which has since been repaired.