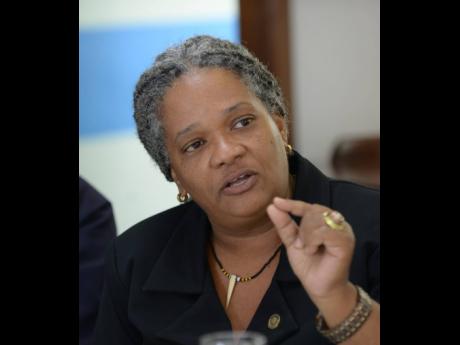 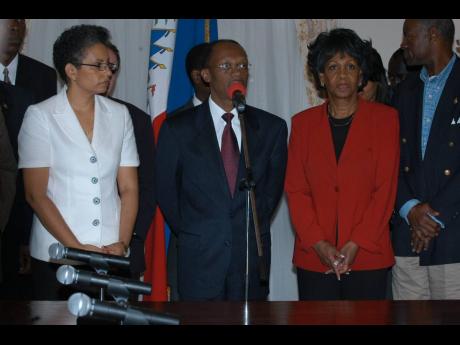 File
Jean Bertrand Aristide and his wife Mildred (left) address a press conference on February 21, 2004 at Haiti’s presidential palace eight days before he was ousted as president. On the right is US Congresswoman Maxine Waters.
1
2

When news broke Wednesday that Haitian President Jovenel Moïse was assassinated, it was another poignant moment for former parliamentarian Sharon Hay-Webster, who recounted her experience in 2004 when she was charged with the responsibility of bringing ousted Haitian President Jean Bertrand Aristide to Jamaica.

In an interview with The Sunday Gleaner last week, she said the assassination of President Moïse is another sad reminder of a country that has been historically plagued with internal and external destabilisation.

“How many coups have Haiti had? About 40? I cannot see how Moïse’s assassination will do the country any good. The lives of suffering Haitians will only be harder,” she stated.

Following his overthrow, Aristide was dumped in the Central African Republic – one of the poorest countries in the world and with uncanny similarities to Haiti, the poorest and most unstable in this hemisphere.

Then Jamaican Prime Minister P.J. Patterson earned the ire of several countries, including the United States, for offering the ousted Aristide and his family a respite at the government’s expense in Jamaica. Patterson had invited Haiti to join the Caribbean Community (CARICOM) in 1997 and in July 2002 it became a full member.

On that fateful day in 2004, with a day’s notice, Hay-Webster found herself the region’s emissary to the landlocked African country to fetch Aristide. Patterson, she said, did not know of her Haitian connection, but she told The Sunday Gleaner her mother was Haitian, and she has siblings who are Haitians.

Remembering the 72 hours between leaving and returning, she left Jamaica for Miami, where she met with United States representative Maxine Waters, whose husband’s private jet was the mode of transportation. On arrival in the country, she recalled staring down pot-bellied generals and glared at a president who described her explanation about her reasons for arriving there as bartering in a “chicken market”.

She straightened her back, took off her spectacles and stared down then Central African Republic President Francois Bozize.

“I sat up in my seat and look up at them and said to myself, ‘hold on, is who dem a chat to’. I looked at Maxine Waters, and looked at the president (Aristide) who was sitting to my right. I was closest to Bozize because, remember, I was head of the CARICOM delegation,” Hay-Webster recounted.

“I got vexed with his ‘chicken market’ comment and I straightened my back and cleared my throat, and said ‘If I might remind you, I have a letter here. May I read it, please?’ I proceeded to read without permission. I read from the letter Mr Patterson wrote as chairman of CARICOM. I told them I do not believe that I am in a chicken market if I have a letter like this.”

The former member of parliament remembered standing her ground and advising them that they did not want a diplomatic incident, invoking the name of United States General Colin Powell, who was secretary of states, and national security adviser Condoleezza Rice.

Bozize was not pleased but relented in releasing Aristide.

She thought back on how difficult it was to communicate her success in retrieving him.

“It was really between me and Maxine Waters who were dealing with issues at the time. Her husband, Sidney Williams, was also there, and Randall Williams from Trans Africa, and Amy Goodman from Democracy Today. It’s her phone I had to use. She had a phone with a very strong signal, because even though I was given a phone to call Prime Minister Patterson to let him know when I was on the plane and departing, the signal just wasn’t working well,” Hay-Webster explained.

She was able to brief the prime minister’s security team.

“I told the security to tell Mr Patterson that I am on the top deck of the steps and I am going to step through the door. I am the last person to go in the plane,” she shared.

When Aristide arrived in Jamaica, then Haitian Prime Minister Gerard Latortue cut diplomatic ties with Jamaica, which was first to Haiti’s aid when the massive earthquake hit in 2010.

Over the years, Haiti has become increasingly ungovernable and Moïse’s presidency was disputed.

Kidnappings for ransom, murders of ordinary and prominent judicial and political leaders, and violent street protests have caused even more instability in the impoverished country.

Members of two Haitian families who spoke with The Sunday Gleaner from Gonaives Friday night pinned Moïse’s death to the country’s “murderous oligarchs”.

They are described as “the monied, business, political, and educated elite”.

They said Robb Rousseau’s September 2020 article in the Haitian Times is an exact description of the oligarchs, and their destabilising efforts in the country.

“The oligarchy is neither on the left nor on the right, but it supports protests for and/or against the government to protect the interests of its small, yet tight network of members. They simultaneously sponsor gangs, police, opposition, and governments. They are simultaneously allies and enemies. They are neither loyal nor traitors, but they strengthen their bases and remove their support if ever those they propel to prominence do not comply with their demands,” Rousseau wrote.

“They finance elections, not because they want change, but to benefit from all state public contracts and to maintain their political hegemony. If they wanted to shake up the status quo, they would have adopted a single candidate, they would have endorsed government-sponsored social programs and facilitated market liberalization instead of accumulating customs exemptions and property and inspecting rights of all the country’s ports.”

He continued: “They make the law, they are the law, and they decide which groups of men are to enter the market. Intelligently, they control the sectors of commerce, finance, energy, transport, and even that of weapon manufacturing as well as that of all things powder.”

Now CARICOM has again pledged assistance to its member state in mourning, and the USA has offered investigative support. Reports are that a large delegation of Colombians and two Haitian Americans carried out the attack which left Moïse mortally wounded and his wife Martine-Marie wounded.

Jamaica’s foreign minister Kamina Johnson Smith told the Senate on Friday that Haiti has not asked for any help.

Hay-Webster said all fair-minded interest must sit at the table with all contending forces, including the oligarchs, and work out what is in the country’s best interest.

“There needs to be some sort of mediating group that stay and hold for a while. This is not for a day or a week. This is for the long term and individuals need to be honest,” she said.

Jean Bertrand Aristide was the first democratically elected president of Haiti after the coup d’état which removed Jean-Claude (Baby Doc) Duvalier in 1986. After leaving Jamaica, he was exiled in South Africa and returned to Haiti in 2011.