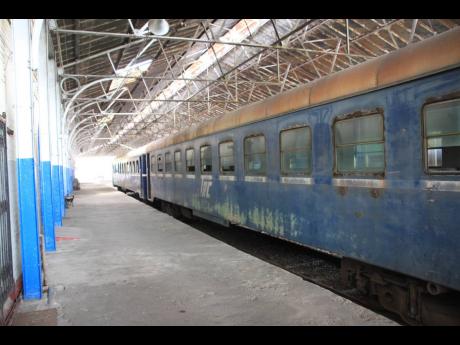 File
The ‘Schools’ Passenger Train Service’ project, seen as part of the revival of passenger rail service in Jamaica, is being pursued to provide a ‘safe, affordable, reliable’ means of transporting students,’ said the JRC, noting that two routes are being established – Old Harbour to Spanish Town and Linstead to Spanish Town.

A memo from a consultant instructing the human resource manager at the Jamaica Railway Corporation (JRC) on who to hire and how much to pay for a multimillion dollar school-train project stunned officials at the state entity which is rushing to...

A memo from a consultant instructing the human resource manager at the Jamaica Railway Corporation (JRC) on who to hire and how much to pay for a multimillion dollar school-train project stunned officials at the state entity which is rushing to meet a September deadline.

The JRC is an agency under the Robert Montague-led Ministry of Transport and Mining.

The memo from Anthony Allen, a consultant engineer, is dated April 27, 2021, and was titled ‘Employment of Staff – Schools’ Passenger Train Service’.

“Kindly arrange to issue letters of employment,” he ordered Sandra Myers, before naming the four persons (who are reportedly related) to be employed, their positions and their salaries.

Roy Howell was assigned technical director with supervising responsibilities for the rebuilding of train engines and passenger coaches and for which he would be paid a basic monthly salary of $337,508 and motor vehicle allowance of $74,577.

The three others were Khaliel Howell, Kristoff Howell and Kari Howell.

Khaliel, who has training in mechanical engineering, was named project administrator, with responsibility to design and supervise mechanical systems and with a monthly salary of approximately $198,000.

Kristoff was taken on as quality manager, tasked with overseeing the project’s electrical systems, for which he would be paid $168,000 monthly; while Kari was employed as electrical engineering technician with a monthly salary of $158,000.

Allen, who confirmed his role at the JRC and declined to answer further questions from The Sunday Gleaner, told the human resource manager that the persons were to be employed “until further advised”.

That was the first red flag, said an official at the ministry who did not want to be named because they were not authorised to speak to the media.

“Even if you are contracting persons, no one instructs the HR like that and certainly not a consultant. Where did he derive his authority? I’ve never seen this in all my years in the public service,” the official said.

“The persons may very well be competent. I have no questions about that now. It is the process used by the JRC that needs interrogation.”

In its responses to the queries, the JRC, which is chaired by Dennis Wright, was evasive, declining to answer very basic questions about its process in engaging the Howells.

The JRC said the four persons are not employees but contracted on a “short-term basis to perform highly specialised work” on the student passenger rail service project which is under pressure to be ready for the new school year.

Asked to confirm the positions as indicated in the memo, the salaries and dates of employment, the corporation said “not applicable”.

It was the same response given when questioned about the role played by the human resource manager in the employment process.

How and who determined the salaries was also met with “not applicable”. While there is an established government salary scale, entities contracting a person can negotiate outside of those bands.

The JRC did not specifically answer whether the hiring of the four persons was done in accordance with government guidelines, saying that, as a “general principle”, the corporation employs personnel “in accordance” with the requirements.

The positions were not advertised, it said, because the sole-source procurement methodology was used.

However, based on the documentation obtained by The Sunday Gleaner, which points to emoluments and letters of employment, the hirings would be an employment contract rather than a procurement contract under the Public Procurement Act.

A procurement contract would not include most benefits, including motor vehicle allowance, which has been provided for Roy Howell.

Issuing an employment contract would still have to follow the government guidelines, even if the skills being sought are limited and very specialised.

HR NOT AT INTERVIEW

The interviews were done before the work was contracted, the JRC said, but by a panel of two persons – the acting general manager, Donald Hanson, and the consultant.

No one from human resource was involved, based on the answers provided on July 7, which is against established HR principles.

Who authorised the hiring of the four persons, as well as to confirm whether there was any familial relationship among the Howells, was deemed “not relevant” by the JRC.

The project, seen as part of the revival of passenger rail service in Jamaica, is being pursued to provide a “safe, affordable, reliable” means of transporting students,” said the corporation, noting that two routes are being established – Old Harbour to Spanish Town and Linstead to Spanish Town.

Roy Howell has a registered business, Howell Railroading Service, which does maintenance and repairs. He has reportedly worked for decades in the local industry, and with bauxite companies where the rail service is most active.

Messages to him have not been returned.

Kristoff, who’ll oversee electrical work, said he was contacted by a JRC official with a job offer but said he could not address any questions about his “co-workers”.

“I worked with JRC back in 2012 (internship), and after that JRC closed down. For this project, they called us … asked us for an updated resume. Then we submitted it,” explained the holder of a bachelor’s degree in electrical engineering.

Kristoff and Khaliel are principals of SEBI Enterprize Ltd, an online sales and marketing firm, according to Companies Office records.

It was not made clear on whether a proposal or price quotation was presented before the contracts were issued, as required under law.

Jamaica’s rail service is part of a small industry and the available skill sets would be limited, explained the transport ministry official, who insisted that the responses of the JRC to the questions “make me question what else is happening that should not be”.

The official argued, “So, I understand the pool is small but it does not mean that you can bypass the procedures that will ensure transparency and protect taxpayers and the contractors.”

Added the official, “The HR department not being involved is the greatest cause for concern.”

The JRC situation may look “a way” but it may not be an attempt to undermine the procurement system, argued Dr Leachim Semaj, a human resource consultant.

“We know there’s nepotism; we know there’s political interference many times – we know these things happen. But I would not start by assuming it unless there’s specific evidence this was intended to go beneath the system,” he cautioned, noting that time pressures can cause entities to ‘rush’ decisions.

“It does happen that planning was poor and then you realise that you really need to get this done and you just don’t have the time to go through the regular mechanisms.”

Fitzroy Williams, who was JRC general manager from 2013–2021, said the project was approved in 2019 for roll-out in September 2020 but got delayed because of the COVID-19 pandemic.

He said, up to March 31 when he left the agency, over $188 million was budgeted for the project whose implementation had not yet started but with the deadline months away.

“Nobody at any level put as much effort and work into trying to get that project implemented,” he said, defending his tenure.

The rail service in Jamaica, one of the oldest in the Western Hemisphere, closed to public passengers in 1992. However, successive administrations have sought to resurrect it as an option for public transportation.

The JRC, for which divestment has been considered, has total assets worth $393 million up to 2017/2018, according to that year’s annual report tabled in the Parliament earlier this month.