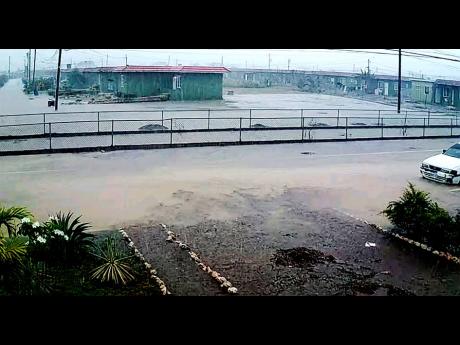 Contributed
Seville Meadows Phase Three in St Catherine is flooded whenever it rains. 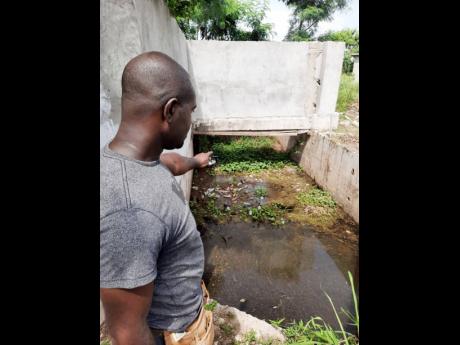 Corey Robinson
A clogged drain outside the Seville Meadows Phase Three perimeter fence is the main source of the flooding. 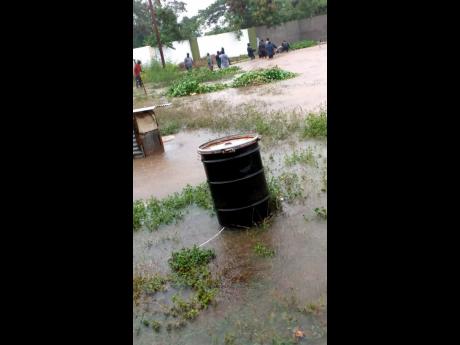 Corey Robinson
Residents of Seville Meadows Phase Three in St Catherine are begging the powers-that-be to address their flooding problem.
1
2
3

The stench of sewage permeated their yards days after Tropical Storm Elsa doused the island. Backwash, residents said, from a clogged drain outside the Seville Meadows Phase Three perimeter fence in St Catherine.

It is a hard reminder of the knee-high floodwaters home-owners of this section of the housing scheme have had to wade through, at least twice, with last year’s passage of Tropical Storms Zeta and Eta. Another harsh reminder is the cement blocks nearby used to hoist furniture from flood waters inside their homes.

It is a simple fix, they argued – the powers that be need to clear the drain at the end of a gully that runs through the community. Yet, after letters to their Member of Parliament Dr Andrew Wheatley, the St Catherine Municipal Corporation, and Prime Minister Andrew Holness, nothing has come of their pleas.

Not even a visit from the MP, who confessed Friday that he heard of the issue during the heavy rainfall, but said that the problem is for the municipal corporation to solve. Nothing also from Mayor Norman Scott, who absolved himself Friday, pointing to Wheatley and the councillor of the Homestead Division for remedy.

Alarmingly, though, Scott, like the residents, was also dumbfounded as to whether Mark McLean or Owen Thompson was the councillor for the Homestead division.

“Listen, while I’m the mayor and chairman of the council, I can’t go into a councillor’s division to do things. They have their funds that they get and so they use it to their own priority. There is a councillor who is elected to that geographical space!” Scott responded curtly to Sunday Gleaner queries, adding that he has not seen any letter to his office on the issue.

“These are some of the reasons why I don’t want to have these discussions. You are making it appear as if I don’t care about what is happening. I have overall responsibility, yes, but the councillor must say why is it,” he said, noting that any letter to himself or others at the municipal corporation would have been forwarded to the councillor.

“The MP is not the local planning authority. All of who do development, works for the parish council,” he quipped, before relenting Friday when told that the blocked drainage is located outside the gated community.

“I was made aware of the situation about Sunday/Monday; some flooding and drainage issues. I’ve not seen the letter. I have not visited the area ... I was told second-hand, I have not confirmed it. I have not been around there as yet and that’s all I can say on the matter,” the MP said.

“Of course I’m going to go around there. I soon go around there go see what’s going on. It is a part of my job,” he said, promising that his visit no later than Wednesday will be accompanied by a team from the National Works Agency (NWA).

The MP’s promise came as comfort last weekend but residents of Seville Meadows are hoping they will not be fooled. After all, they have paid contractors $60,000 a day and have themselves worked tirelessly to clear debris from other communities washing through the gully. But, unless the area at the end of the waterway outside the fence is cleared, their efforts are in vain.

Three years ago, Kurt McLaughlin purchased his home for just over $7 million. Now he is thinking of selling the property and relocating.

“I can’t deal with this. Me roof not leaking and me house still a flood out. Furniture, everything a wet up. Block me have to put the things on, so them nuh damage,” said McLaughlin.

“It is a terrible situation, star,” he added, noting that, like neighbour Terron Brown, he frets whenever there is heavy rains and he is not there to hoist the furniture.

Shada Morgan-Robinson gets the most sympathy from the affected residents. Her home is the first to flood when the water backs up. Worse is that she has a 10-month-old baby.

“I’m frustrated. If I’m home and the rain is falling I cannot leave home, because I’m terrified of what could happen. And, if I’m on the road, it makes it even worse,” she said.

“When that happens, I get panic attacks because I don’t know what is going to happen. Last year October when it rained, water came in on me and all my furniture were damaged. Everything became waterlogged. I don’t know how much of this I can take.”