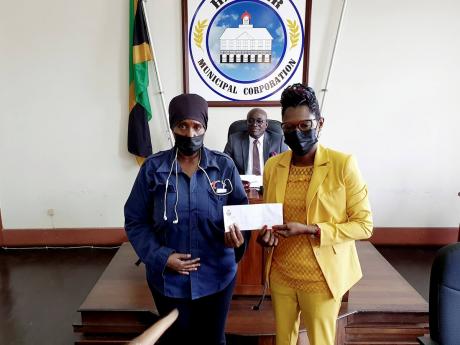 Nicole Bookal, a police officer attached to the Hanover Municipal Corporation (HMC), was presented with a special award for her professionalism and overall good service during Thursday’s monthly meeting of the HMC in Lucea.

Lucea’s Deputy Mayor Andria Dehaney-Grant presented Bookal with a cheque, the total value of which was not disclosed, as a token of the HMC’s appreciation of the fine service she has given since she joined the HMC as a municipal officer in 2008.

The presentation, which took place during the agenda item for ‘mayor’s announcements’, saw Bookal coming near to tears as she was roundly praised for her work by the HMC officials.

Lucea’s Mayor Sheridan Samuels, who admitted to having a rocky relationship with Bookal in the past, said he had grown to accept that what he was doing was listening to others and using their impression to judge her.

“I was so wrong,” said Samuels, in agreeing that Bookal deserved the accolades showered on her.

Dehaney-Grant described Bookal as the face of the corporation, who has stood out for principles, fair play, and regulations being followed.

“I can tell you that you being at the front of the building there says a lot for us as a corporation,” the deputy mayor said.

Bookal has been assigned the duty of checking the temperature of everyone who enters the building, sanitising their hands, and seeing to it that they have on a face mask. She also advises persons who work inside the building when they have visitors at the entrance, and has been credited for not letting anyone, not even staff members, inside the building without following the laid-out health protocols.

Instances were mentioned of occasions when the chief executive officer, David Gardner, and the mayor were stopped at the entrance to the building and asked to follow the health protocols before entering the building.

Following the presentation to Bookal, a decision was taken by the councillors to make the recognition of exemplary work by the employees a quarterly affair.