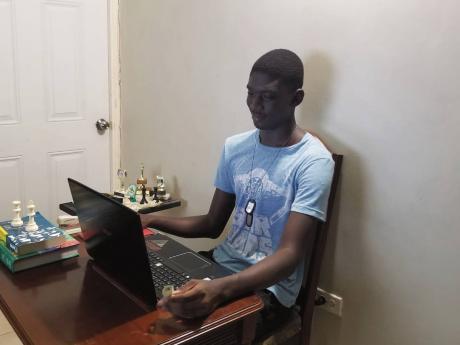 The event was held online and for Martin, while it was strange, as he was used to the face-to-face competitions, he was able to keep his focus and get the job done.

Commenting on his victory, Martin said he feels “extremely elated and grateful to his coaches”.

Coached by Kevron Campbell, Warren Elliott and Jomo Pitterson, he said there were times he had to discipline himself to remain focused as it has been a long, hard year.

Martin also shared that his mentor Walter Williams set the foundation on which he was able to build to be successful.

Martin, who edged out Lontae Walker and Kamari Stephens, said following his title win, he is now eligible to represent Jamaica to play in the World Cadet Youth Championship, which will be held online in August.

Just before Martin looks to the world championships, he said he has a National High School Championship coming up, which will see him representing his school for the fifth consecutive time.

“Being only in lower-sixth form, I have one more year left to keep the fire burning, ' Semper Flagrans',” he shared with The Gleaner, as he noted that his dream is to start his own chess company.

That's not the only dream on his radar. The 18-year-old points out that his other interests include construction technology and joining the Jamaica Defence Force in the future.

Martin, who was featured some time ago in The Gleaner as an outstanding student at the Free Town Primary School, said the groundwork for success and focus was laid and Glenmuir cemented it.