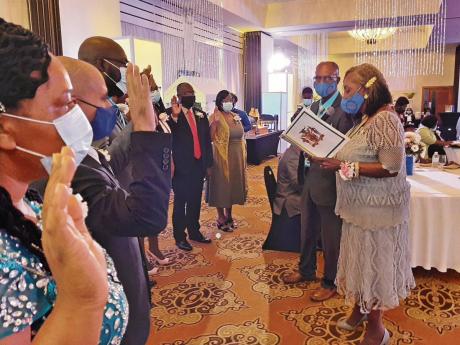 Contributed
Custos of St Ann Norma Walters leads some of the newly installed JPs through the installation process.

Forty-six new justices of the peace (JP) were commissioned on Thursday in a ceremony at Sandals Ochi Beach Resort, with Justice Minister Delroy Chuck urging them to be their brother’s keeper.

The new JPs were trained in May via video-conferencing and joins approximately 400 other persons serving in the parish, with Custos of St Ann Norma Walters charging the newly trained team to maintain their high standards.

Addressing the ceremony, Chuck urged the new JPs to perform well not just for themselves, but also for their communities and for Jamaica.

“Far too many justices of the peace feel that having been installed and now have JP behind their name they can retreat back to their cocoon and forget everything,” Chuck noted.

“But I want to emphasise to you that the fact that you’re now JP doesn’t mean that everybody must just bow to you and respect you; you must earn the respect. Be your brother’s keeper,” he urged.

And in welcoming the new JPs, the custos urged them to do well.

“As justices of the peace you are an integral part of the system of governance of our beloved country,” Walters said.

“My charge therefore to you is to continue to invest in the characteristics which strengthen your resolve for high service, and volunteerism,” she added.

And acting Senior Superintendent of Police Dwight Powell, the commandant for the parish, in welcoming the new appointees, reminded that law and order must be the primary focus.

Powell said he was expecting the relationship between the police and the JPs to be harmonious.