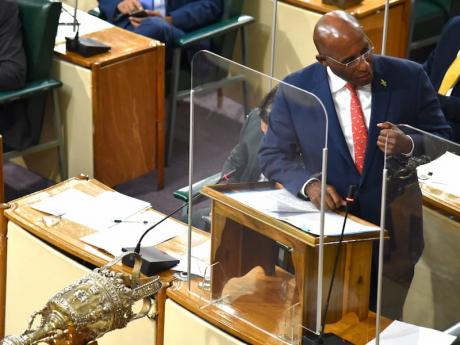 Economic Growth and Job Creation, Senator Aubyn Hill, highlights a point while making his contribution to the State of the Nation Debate in the Senate, on Friday (contributed photo)

The number of jobs in the Business Process Outsourcing (BPO) sector increased by 15 per cent over the past year, with 44,000 people employed in the sector as of June 30, 2021.

This compares to the corresponding period in 2020, which saw 38,400 persons being employed.

Minister without Portfolio in the Ministry of Economic Growth and Job Creation, Senator Aubyn Hill, who made the disclosure, said this increase in jobs happened despite the economy shrinking by over 10 per cent during the same period.

“I am extremely pleased to tell Jamaicans that in the year to June 30, 2021, the BPO Services sector brought in US$780 million to the Jamaican economy. That's no small sneeze (during) a time when our economy was shrinking,” he said, while making his contribution to the State of the Nation Debate in the Senate, on Friday.

Hill stressed that the Government appreciates the commitment of cash, management and energy that the 87 operators in the sector, including 10 Fortune500 companies, have made to Jamaica and the thousands of jobs these investors have provided for so many Jamaicans.

“This Ministry of Economic Growth and Job Creation will continue to do everything in our power and within the law to provide the support and ease-of-operation these investors need to run their businesses,” he said.

Hill further pointed out that growth plans for the sector include nine new sites across Jamaica by existing players, adding that “there is a new investor who is about to establish a 70-seat facility in the Montego Bay area.”