Jason Lawrence pushes past challenges to his school of choice 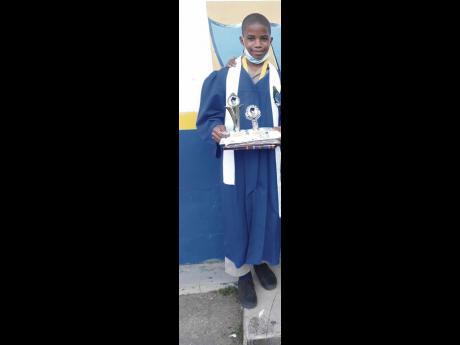 TWELVE-YEAR-OLD Jason Lawrence is breathing a sigh of relief now that he has been placed at the institution of his choice – Manchester High School.

Lawrence, who attended Sanguinetti Primary School in northern Clarendon, faced some serious challenges, including a lack of devices, to do schoolwork, and sharing his mother’s phone with his sister when it was available.

Not being able to attend physical classes was a major challenge for him, as it meant relying on the Internet for classes which, he said, was unstable.

“When I do have access to the Internet, I had a lot of grounds to cover and so had to do a lot more work,” Lawrence shared with The Gleaner.

If at times he was tempted to lose focus or not put in the necessary effort into his schoolwork, Lawrence said all he had to do was to think about how hard his mother had it and how much he wanted to make her proud.

“Her love and appreciation for me and my siblings also kept me focus, and made me determined to do my best to be placed at the school of my choice,” he stated.

Lawrence, who enjoys playing games, running and “catching and experiencing different insects,” said his career goal is to someday be a soldier or an athlete.

Therese Briscoe, Lawrence’s mother who has three other children, expressed pride in her son’s achievement, noting that the journey was difficult.

“It was challenging with online classes, as we had to share one device for Jason, his sister and his brother; and added to that, I did not have the time to spend with him as I wanted, because as a single mother with no help from his father, I have to go out to work four days per week on my farm to ensure he gets data plan to do his schoolwork and to make sure they have food to eat,” she shared.

Briscoe said there were also times when Lawrence had to assist his sister and brother with their schoolwork as well.

“I know Jason worries about me, especially when I don’t have it to give them, but we make it with God on our side. I am so proud of my son; and now that he is going to high school, it will not be easy, because he will have to now take more than one transportation to reach school, but I know God will make a way for us,” she said, already wondering how she will meet the expenses for his daily commute to school.