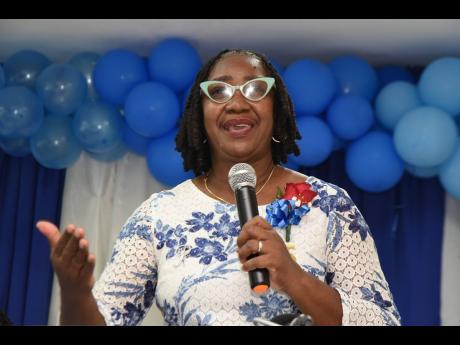 Kenyon Hemans/Photographer
President of the Nurses Association of Jamaica (NAJ) Patsy Edwards-Henry addresses the gathering during an awards ceremony to mark the 75th anniversary of the NAJ at Mary Seacole House in Kingston on Monday.

Nurses from across the island gathered at the Nurses Association (NAJ) of Jamaica headquarters on Monday, in celebration of their 75th Diamond Jubilee.

“We have to always look at our history ... because that will help to guide our future,” says NAJ President Patsy Edwards-Henry, as she recalls the group of 12 nurses, travelling with one suitcase, who founded the NAJ and paved the way for much of their success today. As such, “we thought that for our anniversary we would want to do something for our nurses who toiled tirelessly on the front line”, Edwards-Henry expressed. Despite the fact that many more have aided and contributed to Jamaica’s fight against the spread of the COVID-19 virus, NAJ has decided to start with recognising 75 nurses for their 75th celebrations on Monday.

From a bumpy beginning to many accomplishments, the NAJ’s efforts have yielded many opportunities to have established its headquarters at Mary Seacole House, the Nursing Council of Jamaica, its own credit union, a hostel which accommodates out-of-town nursing students, and their own retirement centre where retired nurses can dwell. “With all that achievement, it is important that we celebrate those who had the vision to think of forming the NAJ,” says Edwards-Henry.

The association now has approximately 2,000 members, greatly surpassing its initial membership of 12, and includes nurses from across the island in every area of nursing, such as nurses in the hospitals, schools, private institutions and prisons.

Treated to cake, lunch, manicures and pedicure alongside music and a dance floor, nurses and awardees kicked back and took a break from the scrubs and traditional uniforms, making fashion statements as they were adorned with corsages and sashes.

Heartened to keep pushing on, nurses were left revitalised to continue on their professional journeys by keynote speaker Michael Maragh, financial management specialist from the Ministry of Health and Wellness. Taking a different approach and putting on his ‘minister cap’, Maragh highlighted that the NAJ’s 12 founders represented the 12 disciples of the Bible, whose mission of service blazed the trail and laid the groundwork for others to follow. Proclaiming,“it is not where you are coming from but where you are going”.

As the NAJ continues to partner with LASCO, engaging in celebrations, on July 23 nurses and nursing students will be sashed and the Nurse and Nursing Student of the Year, 2021-2022, will be named in their annual awards ceremony.

In further partnering with The University of the West Indies and the Jamaica Council of Churches in the many efforts to bring awareness to violence against women and children in Jamaica, the NAJ will participate in a march and webinar scheduled for later this month.

Until then, the NAJ president urges Jamaicans to “big up” a nurse the next time they come in contact with one as, “we are there from the sperm to the worm, from birth/conception to death”, and are one of the largest groups of health professionals.