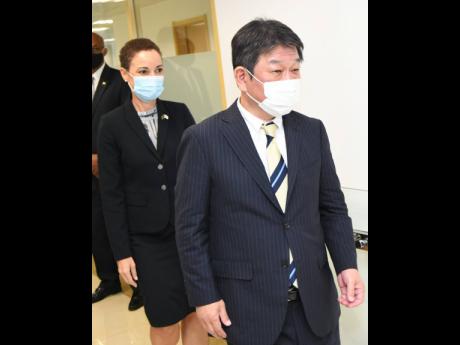 Toshimitsu Motegi, foreign affairs minister of Japan, has reconfirmed his nation’s efforts to support the Caribbean in areas such as healthcare, trade and the environment.

Minister Motegi was speaking during a press conference held on Tuesday at the headquarters of the Ministry of Foreign Affairs and Foreign Trade.

Minister Motegi stated, “We also confirmed that we will work together to respond to COVID-19 and consider cooperation in areas such as environmental protection and disaster risk reduction for overcoming vulnerabilities, particular for small island states.” The minister also expressed Japan’s interest in promoting and investing in Jamaica’s Special Economic Zone project.

This was the first time a Japanese foreign affairs minister has visited the island. Jamaica’s relationship with Japan goes back 57 years. This partnership has been reaffirmed throughout the years. Prime Minister Andrew Holness paid an official working visit to Japan in 2019.

Minister Johnson Smith underscored how this relationship has proven particularly advantageous, especially since the COVID-19 pandemic. In March, the Japanese government donated medical equipment valued approximately $260 million to seven hospitals across the island.

Additionally, Johnson Smith reaffirmed Jamaica’s support to Japan for the hosting of the Olympic and Paralympic Games this year. A shadow has loomed over the Tokyo Olympics, which are slated to begin on July 23, as many Japanese citizens are opposed to the hosting of the Games. Major sponsors, including Toyota, have also pulled all Olympic television advertisements, which is a major blow to the Games.

Despite the controversy, Minister Motegi asserted, “We are determined to implement thorough counter-infection measures and realise the Games safely and securely.” There were no opportunities to ask questions at the press conference.