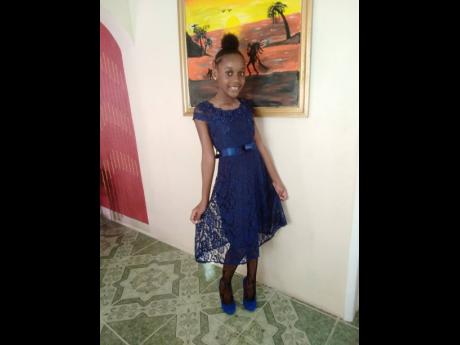 Jéanelle Taylor of Free Town Primary School, Clarendon, is giving credit to her teacher, Jacqueline Hunter, as well as her parents, who are both teachers who ensured that she lived her dream of attending Immaculate Conception High School, St Andrew.

Taylor says it was “a very difficult year”, and she was exposed to an unusual way of learning - online school.

“It required more attention and time, and I was constantly reminded by my parents, who are both teachers, that regardless of how much I’d prefer not to be looking at a computer screen for most of the day, I had no option but to do so,” she shared with The Gleaner.

“In addition to that, the usual attention and assistance that we were used to seemed to have disappeared a bit as my parents worked long hours and always had something to do. I prayed for the school year to come to a close,” were her heartfelt words.

With all the challenges, young Taylor said she never doubted that she would do well as she has always been confident in her ability to achieve. However, she did not know what to expect as she was unsure about how the exam would have been marked.

“I was told about this school. I was also constantly reminded of the dedication, discipline, and hard work it required for me to be placed there. My parents now teach at high schools, but they both taught grade six for many years, and as such, knew the content and were able to explain whatever I didn’t understand in class,” she shared, giving credit to her primary school teacher, Jacqueline Hunter, who she said held classes outside of school hours, at nights, and even on weekends.

“My grades have always been high, but I still wasn’t sure the ministry would see it fit to place me there seeing that not many persons from this region attend that school. I thought distance would also cause them not to since I am from Clarendon,” she stated.

Taylor is also acknowledging the advantage she had of being a child living with both her parents, and her mother, Latoya Johnson Taylor giving her an advantage as she was brought up into an environment where education is valued and was introduced to books at an early age.

Taylor, who considers herself a dancer, hopes to do it professionally in the future, that along with her career choice of being a pilot and a future prime minister of Jamaica.

Commenting on her daughter’s success, Johnson Taylor said that before the COVID-19 pandemic, everything was smooth sailing for Taylor. However, she noted that online learning became a challenge but she settled very quickly.

Johnson Taylor said it was a challenging year for her, too, as a parent because the COVID-19 pandemic brought with it demands as it relates to her job, and to meet those demands, sometimes she had to short-change her children, noting that the guilt weighed heavily on her at times.

“I was quite worried but knew what she was capable of. Luckily, she had an excellent teacher, who saw her potential and motivated her. She filled the gaps for me as I explained to her that I really couldn’t find the time to support her the way I should. That teacher was online sometimes later than 8 p.m. preparing the students. She had to do most of her studying independently as I had to share the little extra time I had between her and my younger child,” she shared.