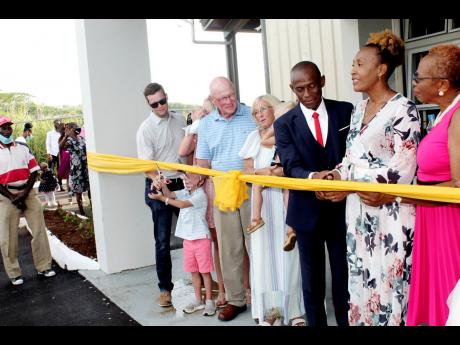 The religious landscape in Trelawny has taken on a $130-million look in the form of the newly constructed Abundant Life Ministry church, which was officially opened in the Bounty Hall community on Monday, July 19.

The church, which was constructed on four acres of land and was primarily financed by American businessman Rod McSweeny, who made a fortune in the motor car industry before selling his business and retiring, is being led by pastors John and Charlene Hines.

In looking back at the history of the church, which started in a classroom at the Bounty Hall Primary School in 2009 with a mere 12 persons, John said they quickly outgrew the classroom and subsequently moved to a tent on lands they acquired in the community.

“Today the membership stands at 112,” he said. “Members identified an area in Bounty Hall which could be leased and a tent used to house us. God sent a blessing in the person of Rod McSweeny. He donated two large tents to cover the marl floor and we began our Sunday services and prayer meetings.”

McSweeny, who is from Birmingham, Alabama, where he manufactured 40,000 automobiles in 42 years, was drawn to John through their shared Christian belief. He said he was moved by God to help John to build the church.

“I met John (Hines) over 25 years ago and I appreciated the kind of work he did, so we decided to contribute to the building of his ministry,” explained McSweeny. “We sold the business, and as Christians who believe in tithing, we asked the Lord for guidance,” McSweeny told The Gleaner.

“I knew that John was looking for land to buy on which to build a church. A voice instructed me to give the tithe to John to build a church. This was done, and today we are dedicating this 140- by 80-foot church built on four acres of land and capable of seating 300 persons,” McSweeny said.

While McSweeny refused to divulge how much money he gave towards the building of the church, a source said it was one-tenth of the US$61 million he sold the business for, which the source converted to approximately J$130 million.

Rev Devere Nugent, pastor of East Baptist Church, who delivered the sermon at the dedication service, urged the members to sow good seeds so that they, too, can reap bountifully.

“Paul encouraged the Corinthians to sow bountifully to reap bountifully. You are encouraged to do likewise. Look at the name of the church – Abundant Life Ministry. It is a name that is sown to expect an abundance of God’s blessings,” said Nugent. “It is because of the way Pastor Hines sowed, for him to reap like this.”

Dian Bartley, a foundation member, told The Gleaner that the circumstances under which the church grew from a classroom to where it is today is a miracle.

“This is a miracle. I see the work of the Lord. It is a blessing to all of us who believe in the goodness of God. Thank you, Jesus, for your blessings on us,” Bartley said.