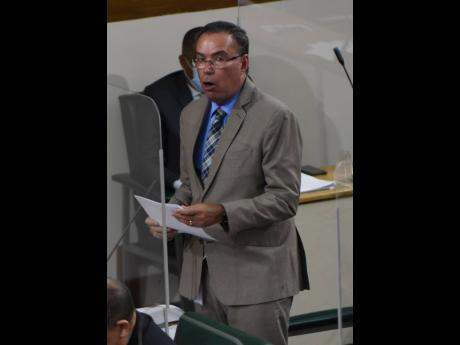 Ian Allen
Minister of Science and Technology Daryl Vaz pilots a resolution in Parliament on Tuesday. 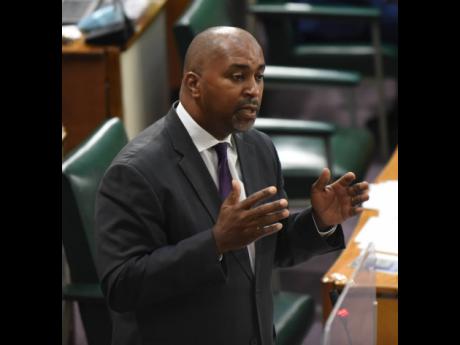 THE PARLIAMENTARY Opposition on Tuesday called for a divide on a resolution prescribing emoluments of between $5.7 million and $6.7 million basic salary for the powerful post of information commissioner, who has the tough responsibility to police the Data Protection Act and the National Identification System (NIDS) when rolled out by the Government.

Minister of Science and Technology Daryl Vaz, who piloted the resolution, said that the post of information commissioner would be classified at the chief technical director (CTD) level in the public sector.

But Opposition spokesman on finance, Julian Robinson, urged the Government to reconsider the emoluments being offered to the information commissioner, noting that such a position should be provided a more substantial salary.

“If we start out bad with the information commissioner who is the guardian of all private data, and data is the most powerful thing right now in the world. The most profitable companies in the world are those who manipulate and exploit data. Rethink it,” Robinson said.

Arguing that the post would be one of the most important and powerful roles within the government system, Robinson said that the holder of the office would be the guardian and protector of the data to be held in a NIDS system.

He said the person appointed to the post would have the task to investigate both the government and powerful private entities who misuse personal data of Jamaicans in breach of data and proposed NIDS laws.

“This person would also commence investigations into breaches by private companies and may have to recommend fines which might constitute three per cent or four per cent of the global gross revenues of a local or international company,” Robinson said.

“It is very important that this person has a level of independence that they are paid at a level that we might attract the best talent, and I am proposing that we tie this post not to the CTD but to the level of a puisne judge,” he reasoned.

Robinson said that in Kenya earlier this year the information commission launched a probe into the ruling political party because of a breach of the equivalent of their NIDS.

“It is someone who will have to have the independence to take on the government acting on behalf of citizens and to take on large private interests. At this level you are not going to attract the kind of person you want.”

However, Delroy Chuck, justice minister, warned against aligning new public sector posts to that of puisne judges. “It is something that is creating major problems,” he told his parliamentary colleagues.

Chuck said he agreed with a better pay package for the information commissioner, a view also shared by Finance and the Public Service Minister Dr Nigel Clarke.

But Clarke explained that the change in compensation for the information commissioner could not be made now but would form part of the Government’s review of compensation packages across the public sector.

He indicated that the emoluments of the information commissioner would be improved at the end of the review next year. When the votes were counted the resolution was passed with 37 ayes, five noes and one abstention.

Meanwhile, Speaker of the House of Representatives Marisa Dalrymple Philibert seemed to have reversed an earlier decision she made on how she would treat with a divide.

“It is my considered view that each member of the House has the right, under the Constitution, to have their vote recorded and the nation know what it is they are saying,” the speaker said.

In May, Dalrymple Philibert had suggested that it is her discretion whether to entertain a divide call on vote-taking in Parliament, arguing that the mechanism only becomes necessary when there is a clear contention.