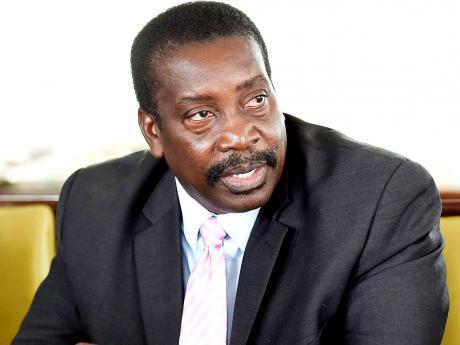 Transport Minister Robert Montague has not commented publicly on the issues brought to light in a Sunday Gleaner investigation in June - File photo.

The spotlight is now on Transport Minister Robert Montague to indicate whether he's confident in the leadership of the Airports Authority of Jamaica (AAJ), which disregarded government regulations in a $443 million investment of taxpayers' money in start-up First Rock Capital Holdings.

“Prior approval was neither sought nor received … this would have been contrary to regulations,” revealed Finance Minister Dr Nigel Clarke in the House of Representatives Wednesday.

Clarke was referring to the first set of shares (US$1m) bought by the AAJ and the NMIA Airports Limited, a subsidiary, in February 2019.

The shares were split equally.

Julian Robinson, the opposition spokesman on finance, whose questions Clarke was answering, pressed the minister on what actions will be taken against the state-owned agencies for making an investment in a private company that was not listed on the Jamaica Stock Exchange.

That was a violation of the 2017 Public Bodies Management and Accountability Act regulations, which stipulate that public bodies must get permission from the finance ministry before going ahead with such a purchase.

Who and how anyone will be held accountable isn't clear as Clarke said the law does not empower the ministry to impose any sanctions nor does it include any penalty for the breach.

He said a reminder of the legislation will be issued to public bodies.

Robinson then asked Clarke whether the government had confidence in the current AAJ board to “properly manage the funds that are under their supervision …in a case where a board breaches its own regulations.”

Clarke said he could not comment on a matter of policy related to agencies that fall under Montague's oversight.

Montague has not commented publicly on the issues brought to light in a Sunday Gleaner investigation in June.

However, the acting permanent secretary in the ministry, Dr Janine Dawkins, said the ministry was “satisfied” there was no conflict of interest in the matter.

The $443m (US$3m) investments were done across two purchases – February 2019 and January 2020 – and took place before the current AAJ board was installed in November 2020.

The chairperson, Fay Hutchinson, has been a member of the board since 2016.

She was promoted to deputy chair in May 2019 and then chair in November 2020.

It means that Hutchinson, a sales executive and close associate of the ruling Jamaica Labour Party, overlapped as a director of AAJ and First Rock for a year until her resignation from the company on March 17, 2021.

Hutchinson is also a shareholder of First Rock having bought her one million units at the same time the AAJ and the NMIA bought their first set.

She did not declare her First Rock directorship which the then AAJ board chairman William Shagoury has now said would have been a “conflict of interest” that he would not have tolerated.

Meanwhile, the finance minister's response has suggested that the AAJ may have violated its own investment policy which said equity investments should be done in “blue chip” companies, firms that are well established and well recognised and with a performance record.

“It is also a matter of judgment as to whether it was prudent for a single-equity investment to absorb as much of the space allocated to equities in AAJ's investment policy as it did, especially if that investment is an IPO [ initial public offer] of a company that was in operation for only two years at the time,” Clarke said.

At least three of the current AAJ board members were in the positions when at least one of the acquisitions was done: Epsi Cooper-Morgan, Pauline Bowla, and Den ton Campbell.

The AAJ and NMIA, the third and fourth largest First Rock shareholders, are now trying to sell their holdings.