Ja will get vaccines from America but no timeline yet, says US Congresswoman Sheila Jackson Lee 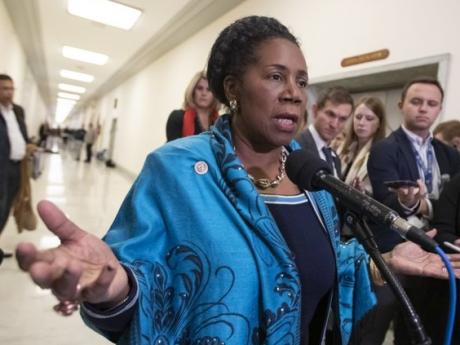 Jackson Lee indicated that discussions have been held with US President Joe Biden and Vice President Kamala Harris on the need for Jamaica and the rest of the Caribbean Community (CARICOM) region to get vaccines - Contributed photo.

United States Congresswoman Sheila Jackson Lee has sought to assure that Jamaica will receive vaccines from the Biden administration but gave no timeline of when the shots will be forthcoming.

She told a town hall hosted by Jamaica's Ambassador to the United States, Audrey Marks, yesterday that the vaccines will begin to flow once logistical and legal issues have been worked out.

The congresswoman, who represents the 11th Texas congressional district and who has Jamaican roots, praised the strong relationship between Jamaica and the US.

Jackson Lee said that discussions have been held with President Joe Biden and Vice President Kamala Harris on the need for Jamaica and the rest of the Caribbean Community (CARICOM) region to get vaccines.

She noted that because of the special circumstances in Haiti, America has donated half a million doses of vaccines to that country.

Haiti has been in turmoil since the assassination of President Jovenel Moïse on July 7.

Jackson Lee said that Jamaica has implemented protocols that will allow the country to emerge stronger from the impact of the pandemic.

“The Caribbean is an important and integral part of the security of the region. The United States sees the Caribbean as extremely important and wants to say that Jamaica is strong and has the ability to withstand the effects of the pandemic.”

Touching on various issues, the congresswoman spoke about the recent decision by a Texas judge who ruled that the Deferred Action for Childhood Arrivals (DACA) programme is illegal.

She assured that the programme is still in place although a hold has been placed on new applications.

DACA is an Obama-era programme that has protected hundreds of thousands of young immigrants from deportation.

Jackson Lee said that people already in the programme are safe and will have their applications renewed.

She noted that the US Department of Justice will be appealing the judge's decision and will seek a hold on the judgment.

“Keep in touch with your embassy and consulates to get an update on what is happening with DACA,” she said.

She said it is time for the dreamers act to be passed by Congress to provide legal protection for DACA recipients.