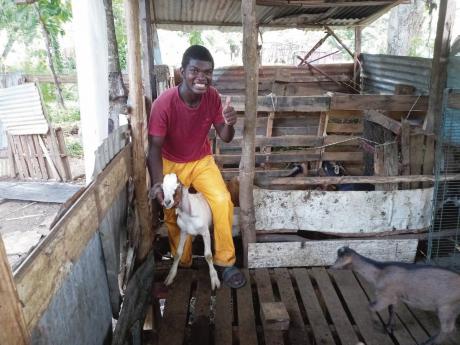 While many youngsters yearn for cushy jobs in air-conditioned offices, 17-year-old Jason Malcolm is planning for a future in farming.

Currently, he operates a small farm at his family home in Westmoreland, where he cultivates vegetable crops such as Scotch bonnet and sweet peppers, but his main activity is goat rearing, which he plans to expand.

“I rear goats for meat and milk. Goat milk is more nutritious than cow’s milk, so part of my plan is to build my goat milk production so that it may be used for export,” Jason told JIS News.

The proud young farmer says he is not only interested in feeding his family, but also the nation at large.

He says that he has a love for farming.

“I got into farming because it is a passion of mine. Farming is not uncommon in my family as my grandfather and uncle are among those who were proud men in agriculture,” he notes.

Malcolm, who is currently pursuing an associate degree in business administration at the Montego Bay Community College, plans to go on to complete a Bachelor’s degree in the field of business, and use the skills learnt to grow his operation.

Ultimately, he wants to play a key role in reducing the importation of goat meat and increasing the export of goat milk, thereby contributing to the growth of the local agriculture sector and the country’s gross domestic product.

His current focus, however, is on gradually expanding his backyard farm and introducing other crops and livestock.

Malcolm believes in sustainable agriculture and practises ecosystem farming, where his grazing goats help to control weeds, while the soil benefits from the organic matter left behind by the animals.

In addition, the waste collected from the goat pens is used in making compost for the crops.

“My small crops benefit from this and I anticipate that my yields will be rich,” Jason said.

The event featured young farmers from across Jamaica showcasing their skills in a number of areas, such as a culinary challenge, technology and innovation, preservation of vegetables, 4-H family composting, and a youth farmer competition.

The expo also included a public speaking competition and selection of male and female 4-H ambassadors.

Malcolm is committed to agriculture and believes that the sector is the way to go for Jamaica.

“I believe that people will need a lawyer maybe one or two times in their lifetime and they will need a doctor maybe three or four times, but the desire for a farmer is constant because we all have to eat and most of our food originates from the soil,” he reasoned.