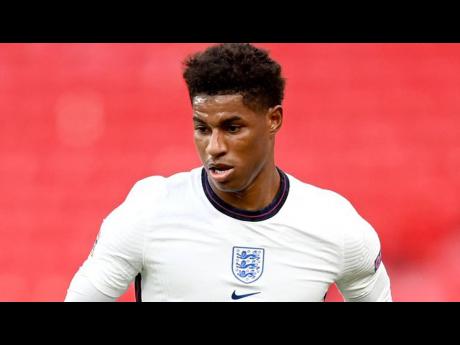 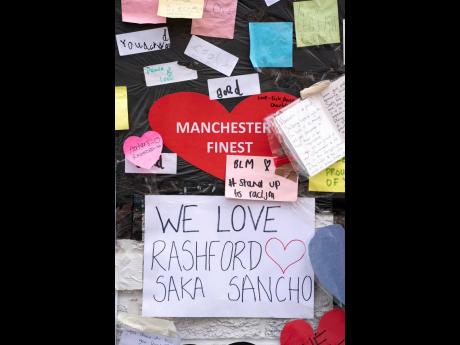 AP
A view of the messages of support left on a mural of Manchester United striker and England player Marcus Rashford, on the wall of the Coffee House Café on Copson Street in Withington, Manchester, England.
1
2

An online petition which was launched the day after three black England players were racially abused on social media when Italy defeated England in the Euro finals on July 11, has hit a record 1.5 million signatures calling for racists to be banned for life from all football matches.

The petition, one of many which went live after the racial blitz against the players surfaced, was launched on change.org by three friends: Shaista Aziz, Amna Abdullatif and Huda Jawad.

The original target was 15,000 signatures, but following the public outcry against the racial slurs targeting Marcus Rashford, Jadon Sancho and Bukayo Saka, who had missed penalties for England, the petition racked up its record-breaking numbers.

The petition message read: “We are calling for the Football Association and the government to work together now to ban all those who have carried out racist abuse, online or offline, from all football matches in England for life. Our England team stood up for all of us - now we must stand up for them.”

A petition needs 100,000 signatures to be debated in the British Parliament, and the three fans who launched their record-breaking petition said they feel “validated in our resistance to racism and that what we have been able to articulate is the sentiment that is held nationwide”.

There are other online petitions which are active on the subject, including one titled ‘Stop online racist abuse of black sports players’. It also had a target of 15,000 but has now surpassed this number with over 150,000 signed up early on in the week.

Meanwhile, further condemnation of the online racial abuse also came from well-known anti-racist alliance Stand up to Racism, which congratulated the England team and its commitment to fighting racism.

Stand up to Racism Co-Convenor Sabby Dhalu said: “We condemn the racist abuse Marcus Rashford, Bukayo Saka and Jadon Sancho have received since the end of the Euro 2020 final. This includes the vandalisation of the Rashford mural in Manchester. We also condemn racist violence and abuse by racist England fans towards African, Caribbean and Asian England fans, Italy and Denmark supporters.

“This racism and xenophobia precisely illustrates why England footballers took the knee at every match during Euro 2020.”

Stand up to Racism held anti-racism protests near the mural for England and Manchester United striker Marcus Rashford on the wall of the Coffee Shop House in Withington, Manchester, where he grew up. The mural was defaced with graffiti the day after the England defeat.

Before and during the Euro 2020 tournament, the England players had taken the knee before their matches in a display of unity in the fight against racism and inequality. But it was an act that caused anger among sections of the England fan base, with some supporters choosing to boo as the players knelt.

The London Metropolitan police have confirmed that they are probing the racist abuse posted on social media.