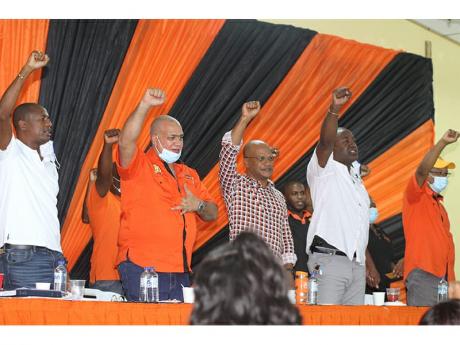 Three of the four vice-presidents designate of the People's National Party (PNP) took to a political platform in Manchester last night seeking to silence detractors who have predicted doom on their stewardship.

Ian Hayles, Richard Azan and Norman Scott suggested that the fractious party was now en route to rebounding, committing to work hard for its success.

“This man won't fail,” Azan declared at the Manchester High School in the parish capital during the public session of the Manchester Central constituency conference.

Azan was nominated for the post of PNP vice-president two Fridays ago after the resignations of incumbents Mikael Phillips, Dr Wykeham McNeill and Damion Crawford and party chairman Phillip Paulwell.

Phillips also withdrew his nomination for re-election as vice-president.

The vice-presidents designate did not address the controversy that led to the incumbents' resignations but earlier, Carlton Bailey, the councillor for the Milk River Division in Clarendon, told Comrades that the PNP was purging itself.

“I love what I am seeing,” said Bailey. “Since certain things happen the other day, things quiet down because the party can only have one leader,” he pronounced, declaring that only the PNP can defeat itself.

It is reported that the VPs and party chairman resigned after negotiations broke down to have two supporters of the former Peter Phillips camp and two Mark Golding backers selected to be endorsed as vice-presidents.

Meanwhile, Azan has echoed that a strong PNP must be united.

He insists that Mark Golding is the right man for leadership and that the VPs would be there to support him.

“This job is not a profile job, this is about building the People's National Party,” he said.

Scott would later tell comrades that he was confident in the competence of the vice-presidents designate.

“Our work will tell the tale,” he said, warning that it was time for the PNP to rise from its slumber.

At the same time, Hayles, the former Hanover Western Member of Parliament, said it was time that Comrades put the PNP first.

He too urged unity saying Comrades had to learn to quietly resolve their disputes.

The vice-presidents designate will be ratified at the PNP's annual conference in September.