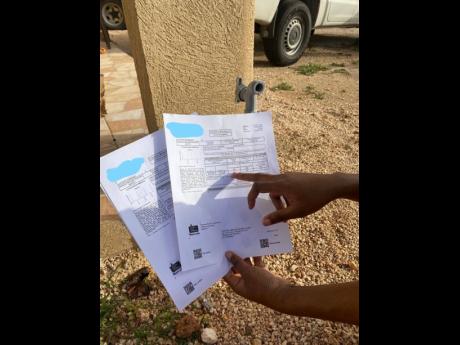 File
New homeowner Rosheda Richards will have to pay the exorbitant bill for her residence in Phoenix Park Village, St Catherine, says the National Water Commission.

Seventeen consecutive days of water leaks, all starting precisely at 11:59 p.m., with no identified end time and with consumption volumes mysteriously lower than days when there were no leaks, statements from the National Water Commission (NWC) show. The result – a water bill of $170,000 and sleepless nights for Phoenix Park Village, St Catherine, resident Rosheda Richards*, who must find a significant amount of that fast.

Outside of an email from Carlene Wisdom, customer relations manager at the NWC’s Portmore branch, the meter of the embattled customer was fully operational after an off-site test – that is all the NWC was prepared to explain.

This, while no evidence of abnormality was detected during a visit by the NWC, and while the meter remained installed at the premises during the off-site test.

“Being that no abnormality was observed at the time of our visit, the logical explanation is that the water was consumed or ran to waste… In light of the above information, there can be no adjustment to the charges in that the meter reading was verified to be correct,” read an email from Wisdom, which Richards has likened to an “extortion note delivered at gunpoint”.

Sure, she has the option of starting a payment plan, she noted, but only after half the amount is paid “or at least $50,000 because she said I can’t expect to go in with less than that”, fumed Richards, reflecting on conversations between herself and the representative of the utility company, a week after The Sunday Gleaner published the new homeowner’s story.

Just six months after being handed the keys to her house – premises she said were unoccupied during the billing cycle in question – Richards is adamant she did not use the water and is more inclined to pay a lawyer to fight the case than hand over a penny to NWC.

Her complaint is not isolated. Several residents of the gated community, and other Jamaicans since the story was published, have expressed similar billing grievances. In fact, according to the Office of Utilities Regulation’s (OUR) quarterly report, complaints about billing matters increased by 11 per cent from January to March – the NWC, beaten only by the Jamaica Public Service (JPS), as the main offender.

But while JPS responded to 100 per cent of the queries forwarded to them by the OUR in the prescribed timelines, the NWC’s numbers were less impressive, with 82 per cent and 60 per cent, respectively.

Richard’s case is not among those being pursued, the OUR confirmed, but like the others, comes as the NWC teeters on the brink of bankruptcy amid privatisation, as revealed two weeks ago by Senator Aubyn Hill, minister without portfolio in the Ministry of Economic Growth and Job Creation.

The issue has left the 32-year-old defenceless and weary.

“There is no way a utility company can expect one resident to be paying that amount! I don’t know how they run their company but there must be a department that can see there is some abnormality. There is no way so many paying consumers can be having the same problem,” fumed Richards on Friday. “She (Wisdom) said she can appeal my case but that I have to pay at least $50,000. There is no way you are going to appeal my case and I must give you $50,000. To me that is I accepting responsibly for what I did not do, water I did not use.”

She added, “It is unfair and the NWC keeps getting away with these things because it is as if they are holding you hostage. They know you need the water so you have to pay even when you don’t use it. That is exactly what they are doing. If I couldn’t find the $170,000, how am I, a normal paying customer, who struggled so hard to buy a house, going to go find $50,000 to give you? This is highway robbery and there is nobody for the customer to turn to.”

Andrew Cannon, corporate communications manager at the NWC, could not give further updates on Richards’ case nor the quaintness of the reported after-dark water leakages. He was also unprepared to explain the NWC’s investigative processes into such matters, asking for more time to check with superiors; but readily insisted that the meter at Richards’ home was among the newer ones.

“What I can say is that something happened at her property,” he offered.

She said the pipes were all bunged, the water main turned off, and the house unoccupied between February and March, the billing period in question. She only moved into the property in April, when she removed the stoppers from the pipes. There was no evidence of water leaks inside or outside the house, she insisted, and no plumbing repairs were made.

Since moving in, her water bill has not surpassed $4,000 monthly, she argued, noting that disconnection remains a lingering fear because of the outstanding sum.

Hill was not available for comment on the matter, but in the Senate earlier this month he painted a grim picture of the NWC’s future as he reflected on the company’s 2016-2017 financial report, where auditors said perennial losses, erosion of equity and cash, among other things, “indicate the existence of a material uncertainty that may cast doubt about the group’s and commission’s ability to continue as a growing concern. At that time, the accumulated deficit of the company was over J$32 billion, and its equity was J$13.92 billion.”

Hill said that by the end of the 2020-2021 financial year, the accumulated deficit had reached J$42.9 billion, and that the company’s equity “is completely wiped out … The hard truth is that NWC does not have anything near the amount of money it needs to deliver the water and services Jamaicans need and expect.”