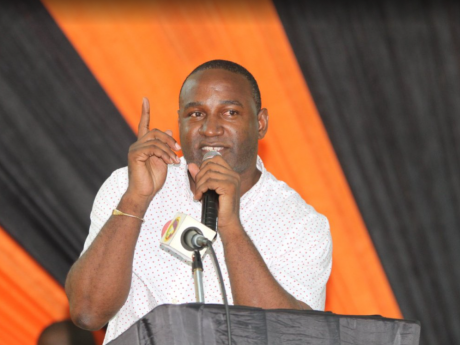 Campbell: It is the fool that says in his heart, there is no God.

Last week, at least two influential Comrades told The Sunday Gleaner that the PNP needed Jesus to bridge the deepening divisions in the 82-year-old party.

But speaking on Saturday night at the PNP's Manchester Central constituency conference, Campbell suggested that there was nothing to worry about.

“It is the fool that says in his heart, there is no God,” said Campbell infusing scriptures and hymns in his address as though he was delivering a sermon to backsliders.

“The PNP have Jesus and we need more Jesus because we are not ashamed of the gospel of Christ,” he said.

According to Campbell, he was anchored in the PNP.

The general secretary said the PNP had to contend with many people whose commitment to the party appeared conditional.

Calling them “if PNPs”, Campbell said they should strive to be among the “even though PNP” group.

He also sought to fortify the presidency of Mark Golding saying there can be no question about his stewardship.

The general secretary acknowledged that there was an issue of division in the PNP.

However, he said the matters that unite the party were far greater than those which divide it.

“Something is happening here. A little thing a gwaan out a road.  There is a groundswell. The people are realising that it's time to come home,” said Campbell before breaking out into singing: “Softly and tenderly, Jesus is calling…”

Earlier, the Manchester Central caretaker Peter Bunting said he too had started to “feel a vibe” on the ground.

Mandeville Mayor Donovan Mitchell used the platform to seek to set the record straight about his relationship with Bunting, his constituency chairman.

In the PNP presidential elections last year, Mitchell parted ways with Bunting and supported Lisa Hanna instead of Golding.

“The war is over, the race is done!” said Mitchell. “I'm not the coward of the county but I recognise that there is one leader of the People's National Party,” said Mitchell.

He argued that although he and Bunting may have different opinions, they have a common goal to make the PNP stronger under Golding's leadership.