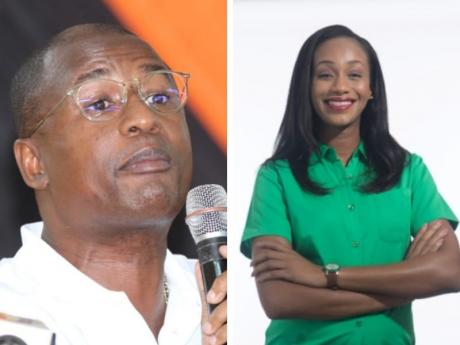 Crawford, an educator, became the first woman to become the Manchester Central MP and the first successful Jamaica Labour Party (JLP) candidate in the constituency in three decades of general elections.

But according to Ian Hayles, a PNP vice-president designate, Crawford's performance has been dismal.

Richard Azan, another PNP vice-president designate, accused Crawford of profiling instead of working to improve the conditions in her constituency.

“How can you change a minister for a benchwarmer?” Hayles asked Comrades who turned out at the Manchester High School.

He was continuing an argument triggered by Richard Azan, another PNP vice-president designate.

He accused Crawford of profiling instead of working to improve the conditions in her constituency.

“She's a bamboo fire in central Manchester,” Azan charged, asserting that her popularity was waning.

However, in his first constituency conference since his electoral defeat, Bunting said he would not beat up on himself.

According to him, his electoral loss was simply the result of a national swing towards the JLP.

In the September 3 general election, there was a 39.4 per cent voter turnout with Crawford polling 8,140 votes to Bunting's 6,989.

Meanwhile, Bunting said he was not concerned about the recent resignations in the party hierarchy involving chairman Phillip Paulwell and vice-presidents Damion Crawford, Mikael Phillips and Dr Wykeham McNeill.

He also said, on the ground, he does not feel any division or pressure.

According to Bunting, with Mark Golding as president and Dr Dayton Campbell as General Secretary, it won't be long before the PNP is returned to government.