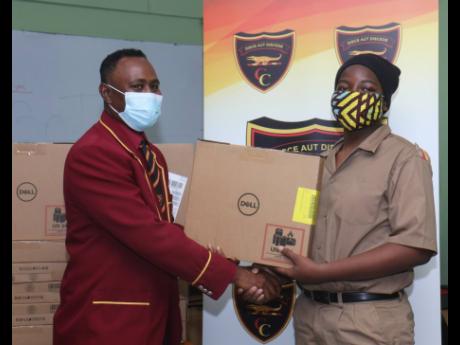 Ashley Anguin
Jahlani Ustanny (right), a grade nine student of Cornwall College receives one of 115 Dell laptop computers from Dr Richard Meggo, president of the Cornwall College Alumni Association’s Montego Bay chapter, during a ceremony to hand over the devices to the school on Thursday, July 22. 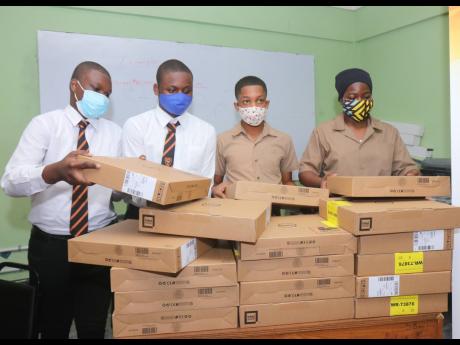 Ashley Anguin
From left: Layandre’ Akoto, Damoyie Sterling, Tyreke Ellis and Jahlani Ustanny adjust the still-packaged Dell laptop computers that they were presented with during a handing-over ceremony at the school in Montego Bay on July 22, where 115 laptops were donated courtesy of the Cornwall College Alumni Associations of South Florida, Canada, and New York.
1
2

The laptops will be used as a part of a revolving programme at the school, where students will be allowed to keep the devices for the duration of their school life and then turn them over to the next generation of students, so they, too, can benefit from the electronic gadgets.

Jahlani Ustanny, who will be entering Grade 10 in the upcoming school term, was one of the students to receive a laptop during the handover ceremony at the school. He expressed gratitude for the donation, as, according to him, he had previously experienced difficulty doing his schoolwork because of a faulty home computer.

“I had a computer, but it was a family computer and it was not working well, as it was pretty slow. Lightning recently caused a surge in electricity and destroyed a lot of the computer’s connections. So it was very hard to work with it like that,” Ustanny told The Gleaner. “I feel that this contribution is very important and it will help to keep us motivated to take part in the online learning space.”

The need for students to have fully functional devices for online schooling has become more pronounced since the closing of physical school spaces because of the COVID-19 pandemic in March 2020. The Ministry of Education said some 120,000 students have been absent from classes over the past year, but other stakeholders have put the number as high as 150,000.

Last week’s donation of the laptops is the latest act of kindness from Cornwall College’s alumni members to the school. It follows a series of other projects, including last October’s presentation of $2.5 million in scholarship grants and the signing of a $5.8 million contract in January for the renovation of the school’s science lab.

Cornwall College’s principal, Michael Ellis, said the donation of the 115 laptops was the culmination of a partnership between the school and its alumni members on their ambitious development plan for the 125-year-old institution.

“One of the tenets of our plan is that we will forge partnerships, not just with parents, but also with the private sector and the public sector, and we will also reach out to our alumni, and, in this particular case, our ‘old boys’,” said Ellis.

“I am very proud to announce that the collaboration has been good, and we will ensure that these devices are used for the purpose for which they were procured. I must publicly give thanks for the collaborative efforts of these associations,” added Ellis.