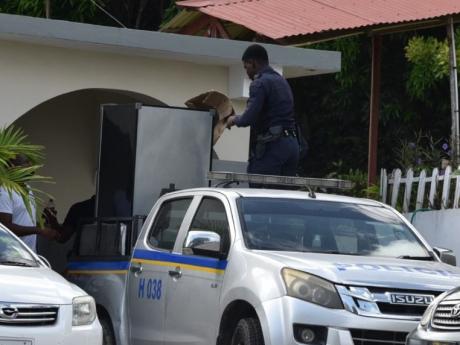 Police personnel were seen on July 23, 2021, removing furniture from the Teamwork Retreat Centre in St James, reportedly en route to the nearby Freeport Police Station for storage – Mark Titus photo.

The High Command of the Jamaica Constabulary Force (JCF) is refuting claims that no alternative arrangements were made for its members who were instructed to vacate dorms at the Teamwork Retreat Centre in Montego Bay, St James last week.

This is in response to a Sunday Gleaner article that revealed that due to the short notice, some of the displaced crime fighters have sought shelter in the very communities that anti-crime measures were employed.

The JCF says that the cops, who were initially on special assignment in the tourist city since the launch of the Zone of Special Operations (ZOSO) in 2018, were given the option to relocate to a division of their choice with 30 choosing to remain in St James.

“At all material times, it was made clear that the foremost factor should be their personal safety and ability to provide their own accommodation,” said a police spokesperson in a statement today.

“Given that these members were part of a special deployment in the division, special accommodation was provided by JCF at considerable cost. However, this arrangement was never meant to be permanent and this was always made clear to the members who were accommodated there,” the spokesperson added.

It was indicated that, after much deliberation, a decision was taken to wind down the JCF's usage of the facility by July 26, 2021, and the members resident there were all communicated with in May of 2021.

“The High Command finds the publication (newspaper article) most unfortunate, given that the majority of the claims therein are untrue and/or misleading,” the spokesperson asserted.

However, on Friday deputy commissioner of police Clifford Chambers told The Sunday Gleaner that the facility will still be used by the JCF.