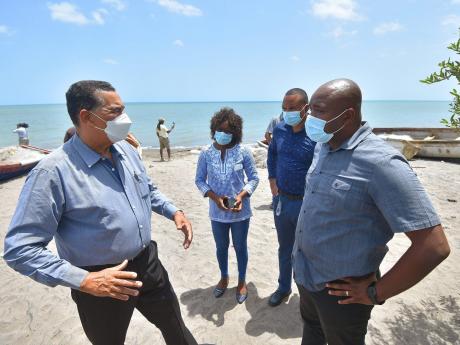 Minister of State in the Ministry of Local Government and Rural Development, Homer Davis (left), in conversation with Member of Parliament for South West Clarendon, Lothan Cousins (right), while touring a section of the community of Banks in the parish on July 22, 2021. Also present are (from left) Councillor for the Race Course Division, Pauline Reynolds, and Chief Executive Officer for the Clarendon Municipal Corporation, Rohan Blake – Contributed photo.

The community of Banks in Clarendon is to benefit from major drainage upgrading and an electrification exercise for households, among other engagements, under the Government's $650 million Rural Development Programme.

Minister of State in the Ministry of Local Government and Rural Development, Homer Davis, says Banks is one of four communities islandwide where the programmed activities, designed to enhance the lives of residents and the overall economic well being of the areas, will be undertaken.

“We will be seeking to make Banks attractive, not only for the people who are residing here but for persons who want to come in,”  Davis said.

He was speaking during a press briefing following a tour of the community on July 22 with senior personnel from the Local Government Ministry and the Clarendon Municipal Corporation, among other interests.

Davis told the residents that the project has major stakeholder support and encouraged them to take advantage of the training component while noting that the downturn in the sugar industry has impacted the livelihoods of community members.

“This project is an integrated one, and it must be sustained. We will be looking at areas in which we can empower you the citizens in order for you to enhance your own economic viability so that people can contribute to developing the area,” the state minister said.

Mayor of May Pen, Councillor Winston Maragh, in welcoming the development, said he was pleased with the extensive support it has received and encouraged the residents to play their part in ensuring its success.

Councillor for the Race Course Division, Pauline Reynolds, said the area has great potential, adding that the project will be “bringing back life to the community”.

“We are going to make sure that it is a buy-in with the community, and they will have to help with maintaining whatever we have here,” she said.

Meanwhile, Member of Parliament for South West Clarendon, Lothan Cousins, said “it is a step in the right direction, and the community is deserving of the project.”