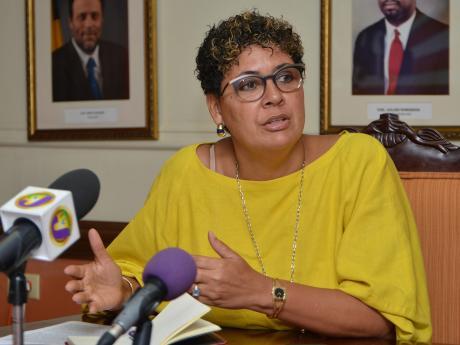 Duncan Sutherland: "As a society we must learn to criticise the work of women without questioning their worth.”

At a PNP Manchester Central constituency conference Hayles said that Crawford's performance has been dismal.

“How can you change a minister for a benchwarmer?” he asked Comrades who turned out at the Manchester High School.

Meanwhile, Azan accused Crawford of profiling instead of working to improve the conditions in her constituency.

However, PNP Women's Movement president Patricia Duncan Sutherland says those comments have no place in a conversation on leadership.

"As a society we must learn to criticise the work of women without questioning their worth,” said Duncan Sutherland.

She said too that the organisation has started the conversation with both men, explaining the impact of their comments.

"We hope that they will reflect and apologise," Duncan Sutherland said.

In the meantime, Sutherland said an agreement has been reached with PNP General Secretary Dr Dayton Campbell for the Women's Movement to design and execute a programme of conversation and sensitisation in partnership with the secretariat for all leaders.

It is aimed at uprooting the patriarchal beliefs and culture that continue to undermine respect, equality and partnership.

“This is a moment for learning, conversation and sensitisation. We have work to do.” said Duncan Sutherland.