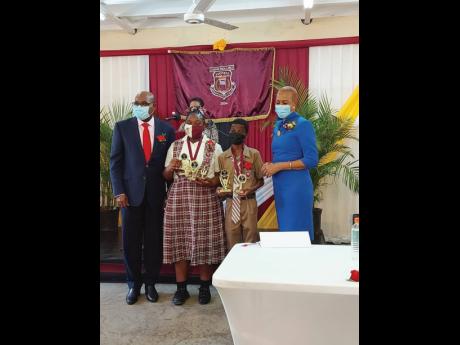 Tourism Minister and Member of Parliament for St James East Central, Edmund Bartlett, has announced that $500,000 will be allocated towards schoolbook support for the top 30 students who have passed this year’s Primary Exit Profile (PEP) at each of the 14 primary schools in his constituency.

“What we are doing this year is that we have identified the top 30 students from the graduating class, and I am awarding $10,000 to each student for book support and $20,000 for the top boy and top girl for the year,” Bartlett said.

Speaking at a school-leaving ceremony for the John Rollins Success Primary School in Barrett Town, St James, Bartlett explained that the initiative would replace his former East Central St James Education Programme, which was established in 1999 and made awards to students based on their performance in the then Grade Six Achievement Test (GSAT).

The PEP exams and accompanying scoring system of allotting points for mastery of different subject areas replaced the GSAT’s percentage system in 2019.

Meanwhile, in her keynote address at the graduation ceremony, Education Minister Fayval Williams made a fresh commitment that Internet access would be established in Jamaica’s schools, including those in remote communities, during the upcoming school year.

“One of the primary resources going forward will be Internet connectivity in schools. I know this has been a problem for many of our schools, but we have made efforts to connect schools that are in remote areas with satellite technology, and we are making a bigger effort to ensure that all of our schools across Jamaica have a minimum bandwidth,” said Williams.

She said the work was done already, and the ministry was now moving to the implementation phase. “I am sure that in the new school year to come, across our many schools in Jamaica, you will begin to feel the positive impact of that plan,” Williams added.

Science, Energy and Technology Minister Daryl Vaz announced in May that 196 schools would be connected to the existing islandwide broadband network for access to high-speed Internet during the upcoming school term.