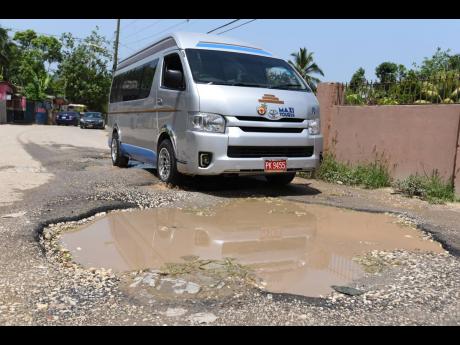 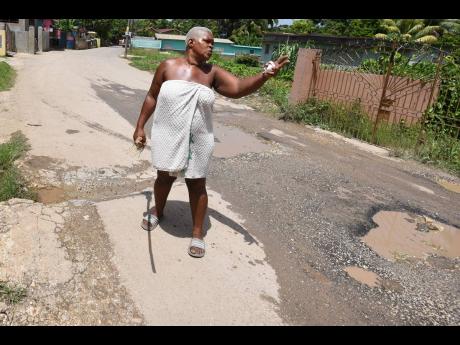 Kenyon Hemans
Arlene Melbourne is visibly upset as she points out the poor condition of the August Town Road in Bog Walk, St Catherine on July 21.
1
2

For three years, Marjorie Gentles, a York Street resident, has had to dig deep into her pockets to pay jacked-up taxi fares and suffer the indignity of motorists refusing to make the journey to her home, because of the deplorable road conditions in the St Catherine North West constituency.

“There are many times that I am in Linstead and decide to charter a vehicle home. Some drivers want $1,200, while others refuse the work and complain about the condition of the road,” Gentles told The Gleaner.

York Street has been riddled with potholes for years and users are fed up. One such agitated commuter is Christopher Smith. He said the road needs to be totally resurfaced, not patched.

“I am almost 50 years old and I cannot remember the last time this road was fix. It is costing us more for upkeep than we are getting from the vehicle,” Smith said.

The standard route taxi fare from Linstead to York Street is $100, while specially chartered services cost much more. Taxi and bus operators have lamented the years-long delay in fare increases during a period that has seen a marked increase in inflation and the cost of fuel and other inputs.

Stanley Knibbs, a driver, said that motorists have suffered destruction to racks and pinions, tie-rod ends, ball joints, control arms, and other parts on their vehicles.

Meanwhile, Moreland Johnson said that he has operated a route taxi in the area for four years, and he has seen where the road conditions have worsened.

“The car can hardly manage the track here, but the love for the job is why mi continue. Nutten nah gwaan. The road bad, di car a mash up, and we can’t get no fare increase. Dem need fi fix di road,” Johnson said.

“If you walk on the road, you may hurt yourself. Too many potholes. Even when you’re inside the taxis, you pain up due to the drivers having to skip and swerve from the bad surface,” she told The Gleaner.

When checks were made with elected representative, Councillor Sydney Rose of the Treadways division in which York Street is situated, he said that remedial works were done but acknowledged that further rehabilitation was needed.