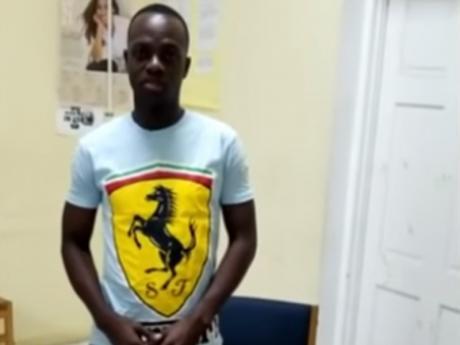 A screengrab from a video of Shaquille Higgins at the Moneague Police Station in St Ann on July 27, 2021.

The St Ann man who was arrested on Monday after an expletive-laden video in which he was critical of Prime Minister Andrew Holness went viral has been released from police custody without charge.

At the same time, Police Commissioner Major General Antony Anderson has ordered a probe into the conduct of the policemen who arrested the man and coerced him to apologise on video to the prime minister.

The police had earlier dismissed claims the man was arrested because of his utterances,  saying he was the subject of an investigation into a case of 'larceny dwelling'.

In a statement this afternoon, the police said after a question-and-answer session, the man was released by the St Ann Police.

Meanwhile, in an internal memorandum, Anderson reminded cops that any breach of the law must be dealt with in accordance with the guidelines in law.

The police reported that Higgins was a suspect in a case of larceny and that the video led investigators to his whereabouts.

Anderson also said that apologies are not to be solicited or coerced from members of the public.

He is also insisting that individuals who elect to apologise voluntarily, may do so by their own means and circulate it themselves without the participation of the police.

However, the police say given the level of complexity when resolving matters and risks associated with the job, there are times when it may be necessary to video record aspects of policing operations.

In those cases, the commissioner said due process must be followed to ensure that images are not improperly circulated or used in a manner that runs counter to the rule of law and respect for all.

“It is inappropriate to share internal reports, correspondence or images captured on duty without proper authorisation. This practice must cease forthwith as it puts the JCF and its publics at risk. Persons found in breach will be held accountable,” Anderson said.