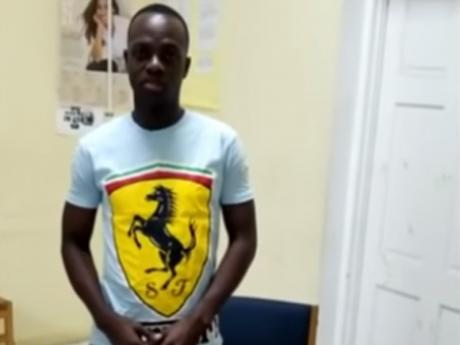 A screengrab from a video of Shaquille Higgins at the Moneague Police Station in St Ann on July 27, 2021.

The St Ann man who was taken into custody shortly after he made remarks about Prime Minister Andrew Holness over the change in curfew hours is taking steps to sue the police and the Government.

Attorney-at-law Charles Ganga-Singh made the disclosure to The Gleaner today.

Among other things, the suit will be filed on the grounds of invasion of privacy and the malicious manner in which the man was taken into custody.

Ganga-Singh said that 24-year-old Shaquille Oneil Higgins of Moneague, St Ann and his family members have contacted him to take legal action on their behalf.

Higgins was taken into custody at the Moneague Police Station on Tuesday.

Higgins was told by cops at the station to apologise to Holness, which he did on video, which was widely circulated.

The police reported that Higgins was a suspect in a case of larceny and that the video led investigators to his whereabouts.

They insisted that he was arrested for that reason and not over his remarks against Holness.

Ganga-Singh said Higgins was released by the police yesterday without charge.

He said Higgins was at the family home when the police took him into custody.

The lawyer said that family members have indicated that they were embarrassed by the police's invasion of their dwelling and that they, along with Higgins, have been negatively affected by the outcome.

Ganga-Singh said that Higgins claims that he felt threatened and intimated by the police's action and the fact that he had to spend time in custody.

Against that background, Ganga-Singh said he is now taking steps to bring a lawsuit.