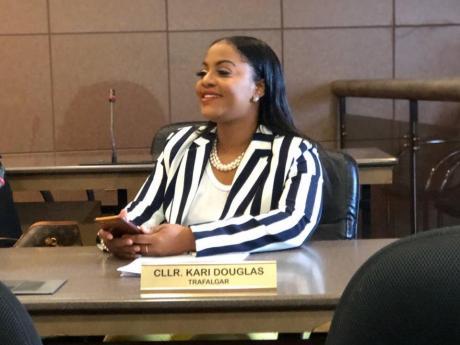 When the 37-year-old councillor appeared in court, a new mention date was scheduled for October after Justice Laurie-Ann Cole Montague was informed that the case file is incomplete.

Jamaica Labour Party councillor for the Trafalgar Division in St Andrew, Kari Douglas, who is accused of assaulting and obstructing the police, is to return to the Kingston and St Andrew Parish Court on October 4.

Douglas' bail was this morning extended on charges of assault and obstructing the police.

When the 37-year-old councillor appeared in court, a new mention date was scheduled for October after Parish Judge Lori-Ann Cole Montague was informed that the case file is incomplete.

Allegations are that about 8:30 p.m. on February 26, the police were responding to a gathering in Swallowfield, St Andrew, half an hour into the nightly islandwide curfew, when Douglas allegedly used her vehicle to block the police from arresting an alleged offender.

Douglas, as an elected official, is among the category of people exempt from the curfew.

It is also alleged that Douglas hit one of the cops.

Following the incident, she turned up at the Stadium Police where she was arrested and charged and later granted bail.