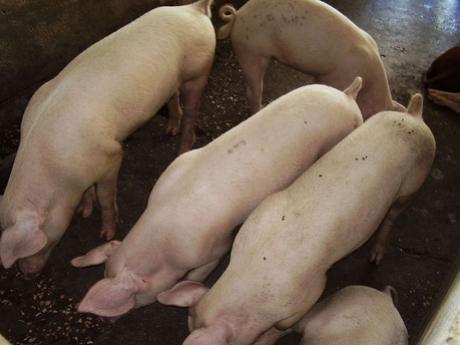 The Agriculture Ministry stated that while not known to affect humans, the African swine fever is almost always fatal in pigs - File photo.

The Ministry of Agriculture is reporting that Jamaica has been placed on high alert for the African swine fever following a United States Department of Agriculture report on Wednesday confirming its presence in samples collected from pigs in the Dominican Republic.

Through its Veterinary Services Division, the Ministry said that it will immediately heighten collaboration with the Jamaica Customs Agency, the Jamaica Defence Force Coast Guard, the Passport Immigration, Citizenship Agency, pig farmers, and all Jamaicans in order to minimise the risk of entry of the disease.

While not known to affect humans, the African swine fever is almost always fatal in pigs, the agriculture ministry emphasised.

It added that the virus is highly stable under extreme environmental conditions and is easily spread by infected swine, contaminated pork products and fomites, and also via the soft tick (Ornithodoros) vector.

“Introduction of the virus into the country may occur by way of importation of infected pork products and contamination of fomites such as feed, equipment, vehicles, and clothing. It can remain viable in animal feed ingredients under extreme conditions, including those encountered during trans-Atlantic shipping,” the ministry spokesperson said in a statement today.

“The movement of contaminated pork products and swill-feeding of domestic swine are important epidemiological factors in the spread of the fever,” the spokesperson added.

Food waste from airplanes and ships have often been implicated in outbreaks of African swine fever, Classical swine fever and other exotic diseases and pathogens, the agriculture ministry pointed out.

It said that this new detection of African swine fever in the Americas has raised serious concerns about the continuing global spread of the disease, which has devastated China's pig population since the outbreaks in that country in 2018.

There is no treatment for African swine fever and there is no known vaccine available for its prevention and control.

* High fever 40-42°C
* Loss of appetite
* Depression
* Lethargy- sometimes refusal to stand or move
* Vomiting and/or diarrhoea with bloody stools
* Cyanotic extremities (nose, ears, tail and lower legs)
* Haemorrhages on the skin, particularly on the ears and flanks
* Huddling together in groups and shivering
* Difficult breathing
* Discharge from eyes and nostrils
* Death within a few days