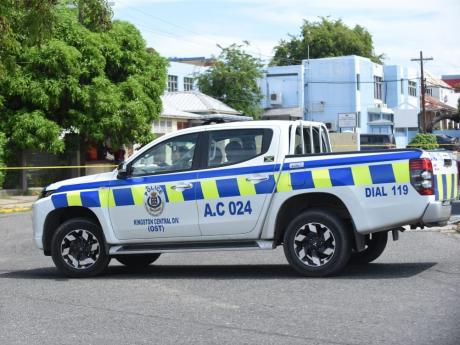 Today’s attack at West Avenue is located metres from the building that was razed by gunmen on Tuesday - Kenyon Hemans photo.

A 55-year-old woman died in a suspected arson attack on her house on West Avenue in Kingston this morning.

It's the second firebombing in 48 hours in Kingston Gardens in the strife-torn political constituency of Kingston Central.

Today's attack at West Avenue is located metres from the building that was razed by gunmen on Tuesday.

A police investigator who spoke on condition of anonymity informed The Gleaner that the woman perished after being trapped.

The assault reportedly began about 3:00 a.m.

Police reached the scene of the fire at 4:10 a.m., with the fire brigade arriving moments after.

Residents of Conrad Lane, which runs parallel to West Avenue, reported hearing a barrage of gunfire on Wednesday night.

The police said the shootings began around 7:00 p.m.

The niece of the deceased was lost for words as she walked around, with her hands on her head, crying out for her aunt.

A family friend who lives in Kingston Gardens said that he was devastated by the incident, remarking, “Mi feel cut up.”

He described the deceased as “someone who you can relate to on a daily basis”.

Kingston Central has been rocked by violence since late 2020, with some residents charging that the gang feuds are politically motivated.

Oscar Palmer and Doreen McLean-Palmer are fleeing the community after their home was firebombed in a predawn attack Tuesday.

Twelve people, including two children, have been displaced arising from that incident.

As at July 28, murders in the Kingston Central Police Division have soared by 52 per cent to 41, compared to 27 for the corresponding period last year.