No longer forgotten: Cheswick residents excited about development in their community 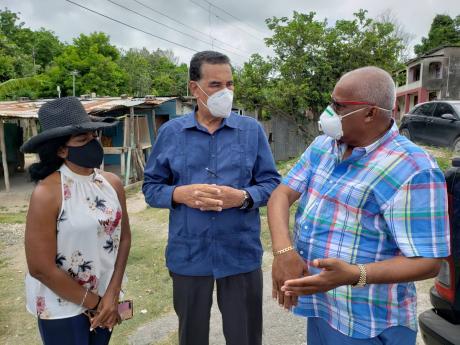 Contributed
From left: Member of Parliament for Eastern St Thomas Dr Michelle Charles, Minister of State in the Ministry of Local Government and Rural Development Homer Davis, and councillor of the Dalvey Division Michael McLeod during a tour of the Cheswick community.

ALREADY, RESIDENTS of Cheswick in eastern St Thomas are anticipating the development of their community, promised under the Rural Development Programme, an initiative of the Ministry of Local Government that is aimed at improving the economic well-being of rural communities over the next two years.

The State Minister Homer Davis, along with the Member of Parliament (MP) Dr Michelle Charles and other key stakeholders on Wednesday, led a tour of Cheswick; one of the five communities selected under the programme which also spans the parishes of Hanover, St Catherine, St Andrew and Clarendon.

The tour, according to Davis, is to be followed by various consultation sessions with community members to identify those areas of Cheswick in need of immediate attention.

“For far too long, rural communities have been left out of the development process. [This programme] involves an upgrading of roads, water supply system and electrification. Where community centres are a part of what needs to be done, that will also be given the necessary attention. We will be also focusing on developing the minds of the young people who are not engaged in any trade or calling. We will be working with farmers through RADA,” Davis said, as he gave an overview of the $650-million Rural Development Programme.

When asked by The Gleaner about their expectations of the intervention, the residents listed better roads, water supply and a keen interest in the development of their young people.

“We want the youth dem get some jobs and such because I don’t see anything like that happening for them. A lot of them leave school and don’t have a job. They are only on the road sitting down. This is also the only village without a basic school … we need one and a community centre. I see dem start it and it doesn’t seem to be working out. Only the structure is there now and the children need it because only those with Wi-Fi can learn now and majority don’t have it,” said Henry Williams.

The resident, who was noticed sitting on his bicycle yards away from where the clergy folks were meeting, told The Gleaner that he has taken a keen interest in the talks of development.

“The community needs a lot of help so I’m happy to see them coming to look and mi wouldn’t mind something happen in real life,” he continued.

The state minister gave the assurance that community members will have the opportunity to share their concerns and advise the Government on those areas that they would like to see an improvement.

The programme was also welcomed by parish officials, including Deputy Mayor of Morant Bay Lenworth Rawle, and councillor of the Dalvey division under which Cheswick falls, Michael McLeod.

Sharing her commendations, MP Charles said, “When [the ministry] reached out to us, we thought about several districts here in eastern St Thomas but after consultation with Councillor McLeod, Cheswick was chosen because there are so many young people here and so much need is here, so we look forward and are grateful for the coming plans to upgrade the area.”