Residents plead for counselling after brutal murder of 82-y-o 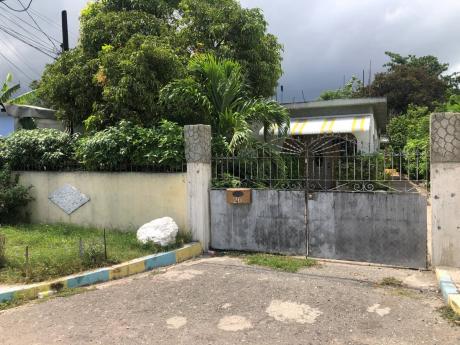 Andre Williams
The house where 82-year-old Dorris Gordon was found with her throat slashed.

Dr Denise Eldemire-Shearer, professor of public health and ageing at The University of the West Indies (UWI), Mona, has recommended urgent grief counselling for the family and neighbours of the late Dorris Gordon, 82, after she was killed on Tuesday.

Gordon, who lived alone on Ashoka Road in Waterhouse, was discovered by a resident. She reportedly appeared to have been raped before her throat was slashed.

Her death is one of two murders of elderly residents this week being investigated by the St Andrew South police.

Expressing condolences to Gordon’s family and friends, Eldemire-Shearer decried the killing as brutality “not deserved by anyone and certainly not by a senior citizen”.

The expert in ageing urged Jamaicans to revisit the values of protecting vulnerable groups and the sanctity of life.

“Our seniors are special to their families and those around them … . Let us hope and pray that her killer or killers are quickly found and justice prevails,” Eldemire-Shearer said.

Residents of Ashoka Road have also expressed sadness and fear in the wake of Gordon’s killing.

They are also pleading for counselling to get past the ordeal.

“We a human being, too, you know, and we nuh live pass everything. Nuff things deh yah weh affect we. When we lay down a night-time and cry, it nuh come out we head,” a resident said.

Householders are particularly concerned that there be urgent intervention for traumatised children.

Women in the community have begun to arm themselves when leaving home.

Some residents say that it was the first time an incident has affected the entire community so deeply.

One woman expressed concern for her own elderly mother.

“My mother is not 82, but she is sickly and she can hardly move around and most of the time she is home by herself, so this could have been my mother we talking about. She hear and she upset like all of us. At the end of the day, we nuh suppose to a live and afraid like this,” the resident said.

The St Andrew South police say a teen has been taken into custody for questioning in relation to Gordon’s death.

Meanwhile, in an unrelated incident, investigations are underway into the killing of another senior citizen.

Williams was believed to have died of natural causes. However, his death has been ruled as a homicide by investigators.

A hole in the back of the head of Williams is suspected to have been caused from blunt trauma.