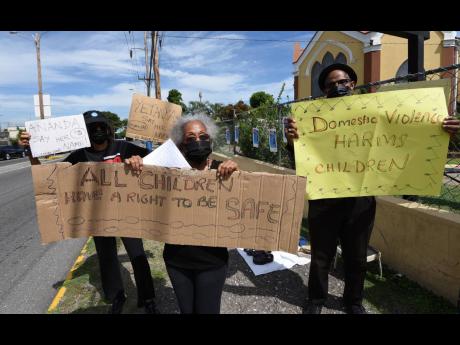 SEVERAL COMMUNITY-based organisations and advocacy groups have raised their voices in opposition to gender-based violence throughout Jamaica. On Thursday, these groups protested at various locations throughout the Corporate Area.

The ‘Thursdays in Black’ campaign to end gender-based violence against women and children is being spearheaded by the regional coordinating office of the Institute for Gender and Development Studies and the Jamaica Council of Churches and is held under the theme, ‘No More Silent Cries’. The Jamaica Women’s Health Survey 2016 revealed that 25 per cent of women, aged 16 to 64, have experienced physical abuse by a partner. Another worrying trend observed is that one in four adolescent girls aged 15-19 experience sexual violence in their lifetime.

Caroline Dyche, a member of the social advocacy group No Nine-Day Wonder, told The Gleaner why she supported the protest being held at the Church of St Margaret on Hope Road. She said: “I am here to raise the levels of consciousness about the atrocities that have been taking place every day both against women and against children. We want to keep it on the front burner.”

She added: “The more people we have publicly standing up and making their voices heard, the more we will get a response. Jamaica is in a crisis when it comes to violence against children, violence against women and domestic violence.”

Dyche has also recommended that the Sex Offenders Registry be made public to ensure that persons are aware of potential predators in communities. This practice currently takes place in other countries.

She also believes that abuse thrives in a culture of silence and thus arming citizens with the knowledge of persons who have been convicted of sexual crimes is necessary. Dyche recalled an incident where her 17-year-old relative was abducted eight years ago for a ransom by a known assailant.

She said: “We realised that the organised crime division; they knew that a lot of abductions had happened but everything was kept under the carpet. In the end, that that community was never made aware that this had happened.”

Head of the Men’s Group for the Church of St Margaret, Albert Edwards, felt compelled to lend his support to the initiative. “I feel compelled as a Christian to identify with the needs of our children and those who are suffering,” he said.

He explained that he personally knows of a colleague who has had to miss work as she was recovering from injuries sustained from domestic abuse. As a result, the men’s group is committed to serving as mentors within the church.

When asked about the criticism church groups have faced in recent years due to accusations of abuse, Edwards stated: “Church organisations are now much more sensitive to look at the capabilities and competences and the psychological make-up of the persons who they may employ or engage in terms of leadership.”