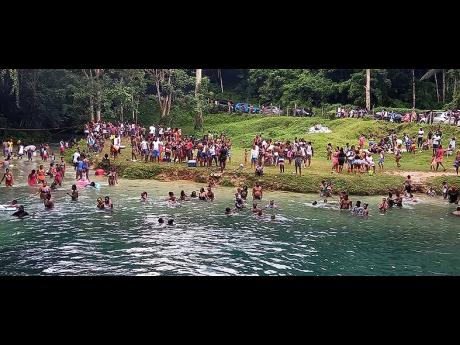 Port Maria Mayor Richard Creary has sounded an alarm about widespread breaches of coronavirus safety rules at the Spanish Bridge river attraction amid a surge in COVID-19 infections. The worsening public-health diagnosis comes as parties and social...

Port Maria Mayor Richard Creary has sounded an alarm about widespread breaches of coronavirus safety rules at the Spanish Bridge river attraction amid a surge in COVID-19 infections.

The worsening public-health diagnosis comes as parties and social events mushroom a month after Prime Minister Andrew Holness reopened the entertainment sector on July 1, turning a spigot that medical officials warned would increase the risk of transmission.

Spanish Bridge, located at the border of St Mary and St Ann, was one of 36 rivers and beaches ordered closed on August 14, 2020, as the Government sought to rein in the beginnings of a second wave of COVID-19 infections.

Creary said that no licence has been issued to operate parties at Spanish Bridge and called for stricter enforcement of the leisure space.

“Clearly, persons are acting on their own and it was a similar situation like this one, which triggered a complete lockdown of beaches and rivers by the minister (Desmond McKenzie) last year. It is also quite clear that the police are not aware that activities have restarted,” Creary told The Gleaner last Monday.

The mayor said that the St Mary Municipal Corporation took into consideration closing the road to the venue and wrote to the Ministry of Local Government and Rural Development for advice on the process. A response has not yet been forthcoming.

The owner of the property – whose identity was not disclosed – wanted to install a lift bar to allow access for property owners and legitimate persons. That plan, Creary said, needs to be revisited.

“This kind of behaviour is unacceptable and just goes to show how adults can behave irresponsibly. They have gone back to what it was before,” Creary told The Gleaner.

Deputy Superintendent of Police Dalian Clarke said that no permit was granted by the constabulary for any event at Spanish Bridge on July 25.

He said the police were notified of a gathering at the venue and went there to disperse the crowd. But he said there was no party at the location.

“It was just persons that went to the river having fun, frolicking, and playing music from vehicles,” Clarke said.

“The police went there and shut down everything in the afternoon when we learnt of it,” he added.

The St Mary police could have more work on their hands in the lead-up to Jamaica’s Independence celebrations which are expected to reach fever pitch on the weekend.

No one was apparently in charge of the venue, and there was an absence of running water and toilets. Social distancing and mask wearing were not observed.

Promoter Hector Lewis, who is affiliated to the Ocho Rios Seafood Festival, estimated that 2,000 people were spotted at the venue.

Lewis, better known as ‘Reggae Don’, was visiting with family and friends from overseas.

A downpour and the absence of lawmen caused huge traffic jams.

As dozens of people revelled to dancehall music, others sat in their vehicles in disbelief at the unbridled quasi-carnival.

“Dis yah country a go lock dung (down) again,” said Richard Bell, a visitor from Kingston, who made the long trip with his girlfriend and child to enjoy the river.

“Mi really shock fi see dis kinda irresponsible behaviour, especially from adults. Not even one person can be seen wearing a mask and everybody just operating as if everything good and COVID-19 fly out. Man and woman dancing on top of each other and rolling in the mud.”