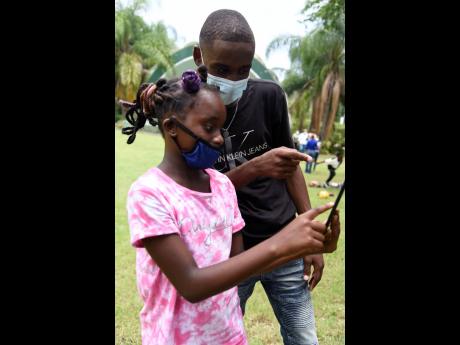 Nicholas Nunes/Photographer
Sixteen-year-old St Thomas youth Jaheim Brown shows Addia Lobban how to manoeuvre a tablet that she received from the Ministry of Education, Youth and Information during a visit to Hope Gardens on Saturday. The teenager was commended for hosting a yearly summer school project in Yallahs. 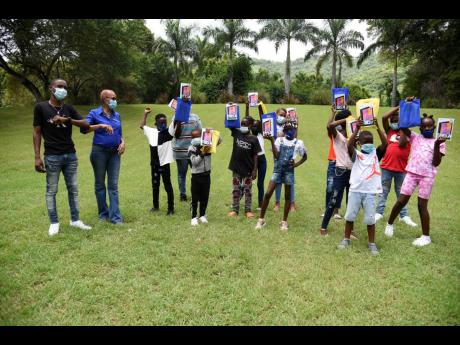 Spurred by the altruism of 16-year-old Jaheim Brown in spearheading a makeshift summer school in Yallahs, donors have lined up to support his charges.

Jaheim and four other teens conducted summer classes, mainly for primary- and secondary-age students who have grappled with the displacement caused by coronavirus restrictions that have kept school gates closed for the better part of the last 16 months.

The upshot has seen troubling levels of learning loss in an education sector already riven with inequity. That has been worsened by the heavy dependence on computers - a luxury in many poor families - and Internet connectivity, which is spotty in remote or hilly communities.

But Jaheim’s sense of purpose, first reported in The Gleaner mid-July, was sparked long before the pandemic. What started three years ago with only eight children has blossomed to include 28 students from across St Thomas.

The Ministry of Education, Youth and Information was moved to donate 15 tablets, among other supplies, to the beneficiaries of his philanthropy on Saturday.

Project manager at the ministry, Shantole Thompson, said that sponsors were overjoyed to support the endeavour.

Digicel, Cari-Med, KFC, and Hope Gardens came on board to provide a memorable experience for Jaheim and his students on their final day of summer school on Saturday.

“[Jaheim] is to be commended for what he is doing, especially in this time when there is a significant push to ensure that our children remain connected to the education system. To see a young man stepping forward to do that, all of Jamaica should applaud him,” the education minister said.

Additionally, the students received a surprise when they were told that they were all being treated to a complimentary trip to Hope Zoo.

“Many of them has never been here before. So this is, I’am sure, an experience they will remember well into their adulthood,” Williams added.

For Jaheim, the outpouring of support has been an unforgettable.

He was also quite surprised about the trip to the zoo, as he had initially planned only for the students to have a day of fun on the sprawling lawns at Hope Gardens as a fitting bookend to summer school.

“It is heart-warming, because some of the students struggle to attend online classes, so to hear [the minister] wanted to give tablets to them, it touched my heart,” he told The Gleaner.

Jaheim revealed that the support received by various individuals and corporate entities has strengthened his resolve to continue the summer programme for the next few years.

He is now even more inspired to teach more young people.

“Seeing the students keeps me going. Their smiles, their laughter, the way they play and talk to me, that pushes me,” Jaheim added.

It’s that passion that roused Yallahs High School student Shemar Wilson to become a tutor for the summer programme. He was impressed by Jaheim’s sincerity and energy.

A number of students have also attributed their success in their examinations to Jaheim’s earnest and stern oversight.

Since joining his classes, Dana has experienced improvements in her class averages.

As a result, she successfully sat her Primary Exit Profile examinations and was placed at her school of choice, Seaforth High.

She credits Jaheim for instilling in her the drive and discipline to excel.

“I had an issue spelling words properly, so how Jaheim teaches us, it makes me spell better. Sometimes he is strict, but he continues to give us practice,” Dana said.