INDECOM probing claims of abuse of Rastafarian teen while in custody 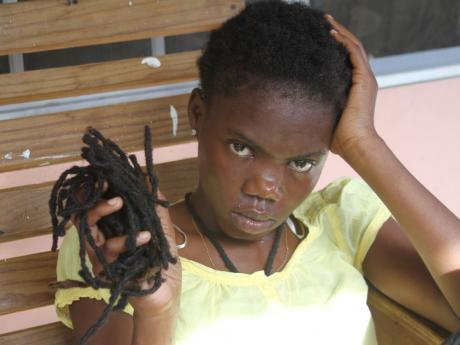 Nzinga King, 19, with a handful of her dreadlocks she saved after she was trimmed allegedly by a cop.

The Independent Commission of Investigations (INDECOM) is probing claims of abuse of a Rastafarian 19-year-old woman who was trimmed allegedly by a policewoman while in custody at the Four Paths Police Station in Clarendon.

Nzinga King told The Gleaner that she has been left traumatised by the incident.

King said the haircut by the policewoman resurrected memories of being gang-raped when she was 16.

The emotional wounds are deep and difficult to overcome, she said.

“I have been suffering from a recent trauma. I've been traumatised and this now, she's just bring me back to some memories of being sexually abused and now I am being physically and mentally abused,” said King.

INDECOM says it views the allegation, as expressed by King in a video, as a breach of rights as afforded to all Jamaican under the Charter of Fundamental Rights and Freedoms.

These rights, as entitled under the Constitution, include the right to equality before the law, the right to humane treatment by any public authority, and the right to freedom from discrimination on the ground of race, place of origin, social class, colour, religion or political opinions, stated INDECOM.

The commission says its enquiry will seek to determine the actions of police personnel while the teen was in custody, to determine if rights were breached, according to the law, and to make pertinent recommendations.

The commission says it has contacted the attorney and mother of the teen to further its investigation.

INDECOM says while it acknowledges the steps taken by the police's High Command in the matter, the allegations regarding the treatment of persons in State custody require independent enquiry.