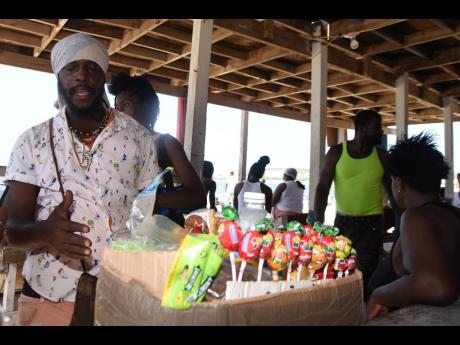 Kenyon Hemans
Keno, who sells sweets at the Hellshire Beach. 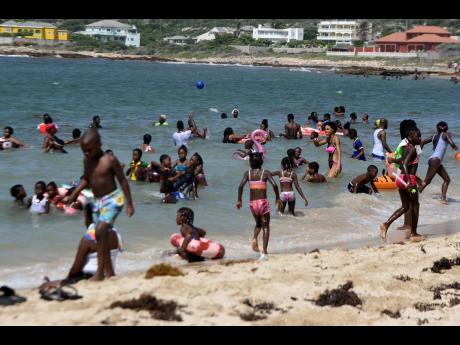 Kenyon Hemans
Patrons at the Hellshire Beach on Monday.
1
2

Salesmen and fishermen of Hellshire beach in Portmore, St Catherine, have bemoaned the most recent curfew regulations that they say are disrupting the smooth running of their businesses.

Rico, the only fisherman who was seen on the beach when The Gleaner visited on Monday, said “business slow [but] the beach alright.” He told The Gleaner that the only thing that hinders business from being prosperous is the tighter curfew measures. Given the uptick in COVID-19 cases since last month, beaches may be ordered to close. If this were to happen again, Rico says, “... when the beach close nuh money cah mek”. He, however, noted that he would just have to accept the Government’s decision and “gwan hol it”.

The pandemic has undoubtedly affected many small businesses, and the livelihood of fishermen like Rico has been greatly affected as, he said, “everything cut down”. He explained that gone are the days when divers would have the opportunity to catch fish during the daytime and night-time as the new curfew time of 3 p.m. to 5 a.m. on a Sunday and public holidays has altered business, thus leaving divers with only one opportunity to catch fish.

The new curfew hours for public holidays and Sundays were announced by Prime Minister Andrew Holness in a press briefing on July 26. The weekday hours are now 8 p.m. to 5 a.m.

“The curfew been slowing down a lot, because the people dem want some more time to enjoy themself and then dem can spend,” lamented Nicholas, a salesman. He expresses that sales usually come in after patrons are finished swimming and eating food.

Keno, a salesman, said he has to work even harder to ensure that he makes money. Arguing that the entertainment sector has been greatly affected by the curfew times, especially since its recent opening in July, he noted that “is mostly day rave party a gwan,” highlighting the difficulty of adjusting to the new norm, as the culture is used to having parties during the night hours. He said if the beach closes due to the recent uptick in cases, he will have to find work elsewhere, perhaps in downtown Kingston, even though he lives within the surrounding area of the beach.

Emancipation celebrations for most Jamaicans usually entail a visit to the beach. However, the early curfew hours did not faze patrons who intended to enjoy the holiday, which was observed on Monday. Scores of persons showed up at the Hellshire Beach, leaving little to no parking space for persons arriving at 11 a.m. Families of no less than five stuck with their respective groups, as they huddled under their respective sheds enjoying the heavy winds and seawater.

Cathrine, a beachgoer, said the curfew doesn’t matter to her, as once she can go to work and earn an income, she’ll be okay. She expressed that the only place she goes to is work, and the only reason she was out on the beach for this Emancipation Day is because her children have been longing to get out of the house. “It nuh really matter to me...as long as it nuh affect me from going to work, that’s all that matters,” she stated. Her friend, who acompanied her to the beach, also shared the same view - the longing for a sense of “normalcy,” noting that they are tired of the protocols of mask wearing and constant sanitisation. She said she wishes for the children to be able to go back to school. She told The Gleaner that her next move is to get vaccinated.