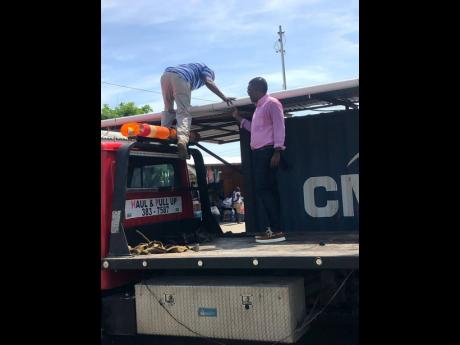 Contributed
Craig Oates (right), enforcement and compliance officer at the Hanover Municipal Corporation, and a flatbed truck operator loading the seized items belonging to illegal vendors onto the truck.

The Gleaner was informed that the owner of the 20-foot shop was given notice and a subsequent court order to remove the shop from the location, but she did not comply.

Craig Oates, enforcement and compliance manager at the Hanover Municipal Corporation (HMC), said that some of its own infrastructure, such as guard rails and fencing, were destroyed during the illegal erection of the container shop.

Oates said that the owner had removed the container from a location across the road into the municipal car park on July 30 or 31.

“It was surprising to note that electricity was connected to the container/shop facility overnight.

“Honestly, I cannot tell you the name of the owner,” said Oates, when quizzed as to who was the owner of the shop in question. “I have never met her. I have spoken to her on the phone, she called me and I told her that she will have to remove it (the container/shop) from the municipal car park and she has not. The electricity was connected on the weekend.”

The container will be held in storage and the owner issued a summons, said Oates.

“We have taken it to a storage area, the owner will be given a summons and taken to court, because, in the process of putting up that container/shop, they also broke down some fences and protective barriers that were there to protect the public,” said Oates.

While explaining that the private property on which the container/shop was previously occupying space also has other vendors located on it, Oates said the swift action taken by the HMC to remove vendors should serve as a warning to the other vendors, who are being urged to relocate their operations to HMC-regulated sites.

“We tried to act very swiftly, to ensure that this sort of movement does not become the norm, and the law is upheld. There is a message to the people who occupy that property (the private car park), there is a procedure to get space in any HMC facility, and illegal vending will not be tolerated,” stated Oates.