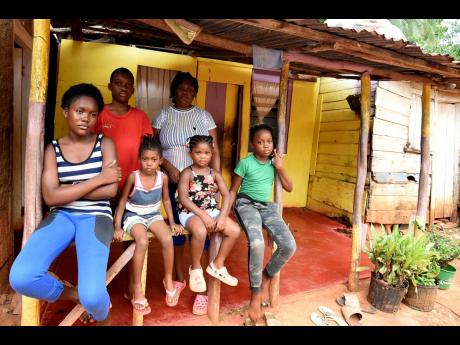 Kenyon Hemans/Photographer
Nekeisha Myers is seen with five of her six children at her home in Mountain Pass, on the fringes of Linstead, St Catherine. 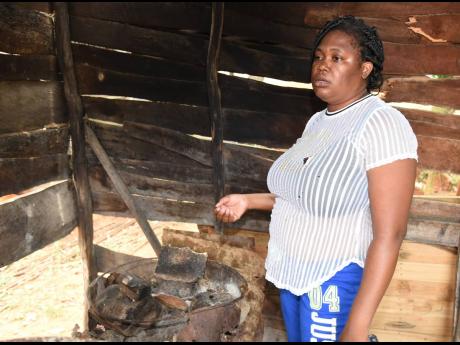 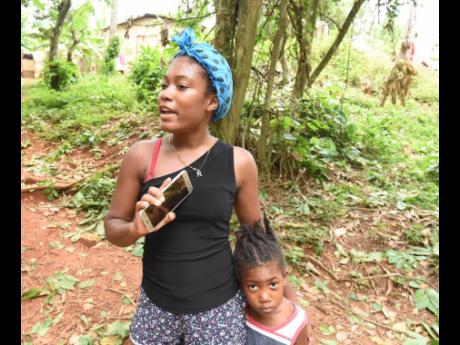 Nekeisha Myers didn’t graduate from high school. She has no qualifications. Not even a stove to cook for her family.

What she does have are five children in the single-parent household - with the father of at least three of the kids reportedly playing a minimal role in their survival. A sixth child, an adult, has moved out.

That’s the recipe for disaster that persists in many rural communities across Jamaica, with intergenerational poverty and teenage pregnancy often inextricably linked.

Myers lives in the rural community of Mountain Pass district in St Catherine, just off the beaten path from the bustling town of Linstead.

The former McGrath High dropout has worked as a bartender and caregiver but left her job to care for her mother, who cannot move around independently.

The cramped home and ramshackle detached kitchen are metaphors of the income divide of the haves and have-nots.

“The living conditions here are not good, and as a result, the children are not comfortable so are not learning as they should. I just need some help to build a room to make them comfortable, and I have the land for it,” Myers said.

The 35-year-old was born and raised in Mountain Pass and depends heavily on the charity of her church and neighbours.

But even though high levels of poverty have been endemic to Jamaica, government data show a consistent decline in recent pre-pandemic years.

Finance Minister Dr Nigel Clarke has referenced that nadir as the lowest in 12 years and the second lowest in 32 years.

But persons like Myers who live in rural areas are more prone to poverty, with the 2019 rate in the countryside at 14.2 per cent compared to 13.4 per cent in other urban centres.

There is often a perfect storm of tragedy stalking poor families, including ill health.

Myers can’t work too far from home because she has a sick child.

“I have my daughter who is sick with a heart condition. Therefore, I have to be close to her as she needs attention, so I am willing to work, but can’t do a live-in job,” Myers said.

Fay Martin, who attends Myers’ church, is hopeful that the desperate mother gets help to get out of her suffering.

“The church helps sometimes, but she needs constant help that she can take care of her children,”Martin said.

A recent study conducted by Caribbean Policy Research Institute (CAPRI) revealed that Myers’ circumstance is not an outlier, especially since the COVID-19 pandemic hit Jamaica in March 2020. Household income slid by 57 per cent between the onset and September 2020 as the country haemorrhaged an estimated 135,000 jobs.

And even though the Government provided billions of dollars in targeted welfare, many of the neediest slipped through the cracks.

Fewer than half, or 43 per cent, of respondents in both rural and urban communities applied for grants offered under the CARE programme. Of this number, 37 per cent of individuals were unsuccessful.

The report indicated that a major reason for the occurrence is the high rate of undocumented individuals.

The petite teenager, who resides in Mountain Pass, too, is also employed.

It has been a difficult journey, she said.

“There were days that I couldn’t even attend classes at the Lluidas Vale HEART Academy as I didn’t have lunch or money, but I persevered and managed to graduate with a Level Two certificate in housekeeping and restaurant services. I intend to go further but need a job now to empower me,” McCalla told The Gleaner.

An alumna of Ewarton High School, the 19-year-old is hopeful that having a skill would put her in pole position for a job.

“My determination to be trained and certified comes from the fact that my mother did not complete school because of my birth. Therefore, I was determined to make the best of a situation gone bad,” McCalla said.

McCalla’s search for employment since 2020 has tested her patience, but she remains resolute to help with the development of her younger siblings.

The rural St Catherine resident said that she is determined not to remain an unemployment statistic.

McCalla is one of the 66,000 unemployed females in the country, according to April 2021 data from the Statistical Institute of Jamaica.

The youth unemployment rate is 24 per cent, almost three times the national average.

Family is what keeps her faith alive, the teenager said.

“I have sent a number of resumes to various organisations but haven’t been able to get employment, and I am determined to change that. I just need to work and help my family, especially my sister, who is a heart patient and needs all the help she can get,” McCalla said.